Local law enforcement agencies, as well as the FBI, have been gradually phasing out their 9mm weapons in favor of flashier, .40 caliber guns for some time. For the purposes of private citizens whose primary concern is concealed carrying and self-defense, however, a 9mm weapon is still most likely going to be your best bet – especially if we’re talking about carrying the excellent SIG-Sauer P228. In the same way that the SIG Sauer P225 pistol evolved from the P220, the SIG-Sauer P228 evolved from the P226. In other words, the P228 features the same DNA as the P226, but with some key changes and modifications. The P228, a small, 9mm handgun, is SIG Sauer’s way of fighting back against the trendy .40 caliber handguns – and for a 9mm weapon, the P228 packs quite a punch. The small size of the gun makes it an ideal candidate for concealed carrying, but the gun is also renowned for its firepower and reliability. Made in Germany, the P228 has been utilized by both military personnel and civilians alike, and is one of the more acclaimed 9mm handguns in history. Read all about it here in our SIG Sauer P228 Review! 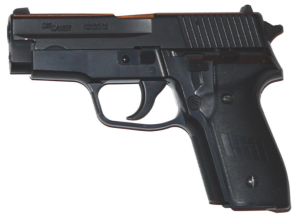 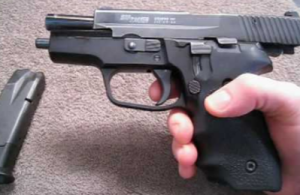 One of the most innovative features of the P228 is the four-point safety system embedded in the gun. Like other SIG’s, this takes the place of a traditional safety switch, and does a more effective job than a safety switch could ever hope to. This system breaks down as follows into four parts: There is the de-cocker, which allows for lowering of the hammer regardless of whether or not a round is chambered, and the safety notch, which also helps to separate the hammer from the pin. The firing pin safety is a mechanism which ensures that the firing pin doesn’t move unless the trigger is pulled – this acts as a drop safety (from any height), and works while the gun is loaded, ensuring a safe SIG experience. The firing pin safety is particularly important in smaller caliber weapons like this which are likely to be concealed and may need to be accessed quickly and in an unorthodox manner. Finally, the slide notch is a measure of caution meant for when the gun is cycling – it makes sure that the firing pin is separated from the cartridge.

All SIG guns incorporate this revolutionary four-point safety system, which has been heralded for its innovation as well as its effectiveness. Safety is the most important topic that there is when it comes to gun ownership, and as such this is a major selling point for the P228. 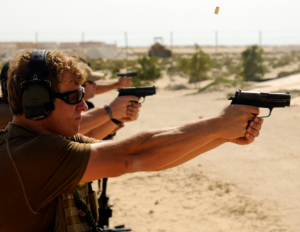 The SIG P228 is notorious for being one of the most reliable guns in history – and given that this gun acts as the only line of defense that many private citizens have between themselves and danger, reliability is absolutely critical. After heavy use and hundreds of rounds fired, the gun works just as well as it did on day one – the accuracy and firing power of the gun do not suffer at all, despite the wear and tear on the weapon. The consistency and durability of this gun have to be experienced to be fully understood – the P228 is just as tight and smooth on your thousandth shot as it is on your first.

Experienced gunmen will have no problem hitting their targets time and time again with the P228. Featuring minimal kick that makes for a smooth shooting experience, this SIG model, on average, is bested only by the larger (and therefore expectedly more accurate) P226 model and predecessor. The P228 holds 13 rounds – nearly twice as many as the widely-used SIG 1911 – and there are a number of extended mag options available for owners interested in greater capacity. 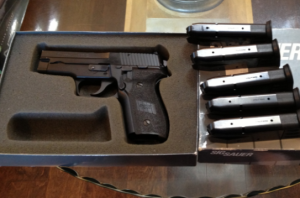 In the case of the P228 (as is always the case when it comes to handguns), your mileage may vary when it comes to feel and comfort of the gun – not all hands are the same size. However, with that being said, the P228 is by and large considered one of the more ergonomic weapons ever built. The gun features both a double column grip and a double action trigger, both of which feel smooth and natural in hand – it’s hard to explain without holding the gun, but the weapon really molds into most hands nicely. Most importantly, the gun is an excellent concealed carry option – its small size makes it easily concealed but manages to not compromise on comfort. Additionally, the safety features that the weapon boasts ensure safe concealment and retrieval every time.

The SIG P228 comes in more than one variant. The M11-A1 Desert features slides and frames that are ‘dark earth’ colored, and the M11-A1 Threaded Barrel features a 4.4-inch threaded barrel, as opposed to the standard issue 3.9-inch barrel – this is a great feature for attachments to the barrel, such as suppressors. All three variants of the P228 are standard-issue for the US Naval Aviation forces, as well as several other units in the US Armed Forces. 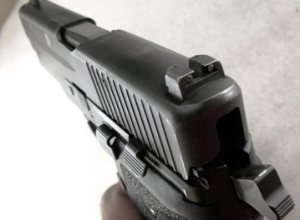 As one of the more popular handguns available, and having been produced by a name brand, there are a large number of options available when it comes to accessorizing and customizing your SIG P228. From extended mags, to threaded barrels, to different kinds of sights, the SIG experience can be made even more user friendly than the stock model already provides – an important factor for gun hobbyists and enthusiasts.

All in all, the SIG Sauer P228 is one of the more effective, consistent, and reliable 9mm handguns that you can find. A counter to the trendy .40 cal handguns, the P228 is ideal for both private concealed carry purposes, as well as home defense purposes. As a gun that has been popularized by law enforcement and private citizens alike, the P228 is one of the jewels of the SIG gun line. Any kind of weapon that is versatile and effective enough to have been made a mainstay of both law enforcement and private owners collections must pack the goods, and the SIG Sauer P228 does just that.

Thanks for checking out our SIG Sauer P228 Review – check back for more on all things guns here at EduMuch!