The M16 rifle is, quite simply, the quintessential assault rifle. Having initially represented the advancement of guns in militaries around the world, the M16 was developed in the late 1950’s but has been repurposed in newer versions or ‘generations’ four times over. Born of the desire of the United States government to replace their standard-issue military rifles, such as the M14 and the M1 Carbine, the M16 took things to the next level. However, though it may be hard to believe now given the popularity of the gun, the plans and blueprint for M16 manufacturing nearly ended up unused. The history of the M16 (also known as the AR-15), what is now the most commonly manufactured 5.56x45mm rifle in the world, is a complex and exciting one; the M16 changed the gun world, but it didn’t do so overnight. This is our M16 Rifle – History and Development piece. 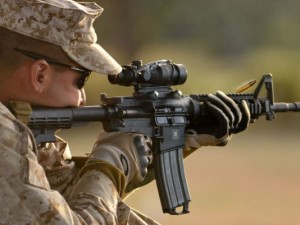 History of the M16 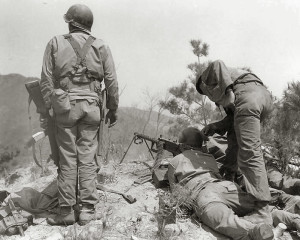 The United States took advantage of a number of military developments that helped propel them to victory in World War One, as well as World War Two. However, one area in which the United States did not hold a clear advantage over its enemies during these wars was in terms of sheer machine gun fire-power. The rifles that the United States military most commonly issued were, by and large, low-quality, unreliable, and lacking in range and firepower. After World War Two, the United States began to look for a single automatic rifle that would allow them to begin to phase out their limited and flawed standard issue firearms, such as the M1 Garand, the M1 Carbine, and the M1918 Browning Automatic. During the Korean War, the US leaned on the select-fire M2 Carbine in hopes that it would fill their need for a superior standard issue gun – this would prove not to be the case, as the military determined that the .30 carbine featured by the rifle was underpowered and already outdone by other militias – an embarrassing reality for the mighty United States. The United States wanted a small-caliber, high-velocity cartridge utilized in its ‘gun of the future’ – the goal was to fit soldiers with what was the class of the gun world, and nothing less.

Certain members of the military hierarchy insisted that a new .30 caliber cartridge be made, that could be utilized by the newer guns in development for the military. Eventually, in order to satisfy these needs, the United States developed the 7.62x51mm NATO cartridge, as well as the M14 rifle. The M14 was subsequently outdone during the early stages of the Vietnam War by the AK-47, which sent the United States back to the drawing board, so to speak. Finally, in the late 1950’s, the US developed the initial build of the AR-15. Although it was met with some resistance at first, the AR-15 was soon recognized as the gun most suited to serve as a universal infantry weapon. 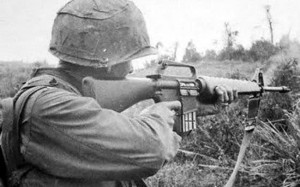 Although initial distribution of the M16 was slow, the gun drew a tremendous amount of praise from the soldiers in the US military that had the opportunity to use it. However, there were still factions in and out of the military that staunchly favored the M14 – testing conducted by the Advanced Research Projects Agency and its officials concluded that the M14 was more serviceable for combat purposes. However, investigations revealed that the conductors of these tests were biased towards the M14 which, it would turn out, was undoubtedly the inferior weapon. The United States was now faced with two opposing factions – the ARPA, favoring the M14, and the military, which by and large wanted the M16. In 1963, the military finally took the plunge and ordered mass quantities of the M16 – albeit after some modifications to the stock model were completed. After moving the charging handle to the rear of the receiver, amongst other changes, the newly modified rifle was re-named the Rifle, Caliber, 5.56mm M16.

The Official Gun of the United States Military 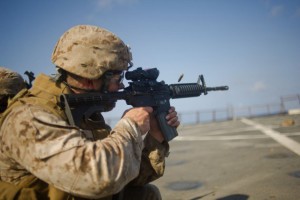 official rifle of the US military

After an order of 85,000 M16’s in 1963, the gun would be slowly doled out to active infantrymen in the coming years until finally, in 1969, the M16 officially replaced the M14 as the standard service rifle of the US military. The gun made it to the ‘big time’ during the rising conflicts of the Vietnam War, as it became the go-to gun for United States military men in active combat. Due to insufficient and/or improper infantry training with the gun, as well as a lack of included cleaning kit (the army mistakenly boasted that the gun was self-cleaning), there were problems in the guns’ early days of use. The absence of a chrome plated chamber as well as incompatible gun powder use were found to be the primary culprits behind these problems, as opposed to flawed mechanics or gun design. After issuing cleaning kits, as well as replacement chrome-plated chambers, the number of malfunctions began to significantly reduce. From 1967 and on, the M16 carrying soldiers stationed in Vietnam reported a remarkably low rate of gun failure – superior to the rates ever registered by the M14. At the conclusion of the Vietnam War, the M16 was known around the world as the gun of the United States military – a distinction that, after a number of modifications and advancements, remains true to this day.

The M16 has gone through a number of changes over the years that have built on the original formula that made the gun so successful. In 1968 the gun was given a 20/30 round magazine, saw its rib raised around the magazine release lever, as well had the forward receiver pins changed. In 1980, a thicker barrel and brass deflectors were implemented, and an adjustable rear sight added. Later in the 1980’s, a full auto-variant was issued by the United States Navy that is still in limited service. More recently, the M16A4 was released, which comes equipped with a MIL-STD-1913 rail. The rail can be fitted with a number of attachments, such as sights, lasers, optics, etc. This version is still the standard issue gun for the Marine Corps Recruits. 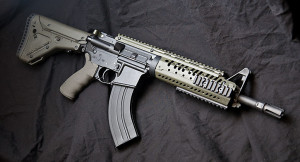 The M16 has had tremendous staying power, which is a testament to the original genius behind the design and build of the gun. Although it too will one day become outdated – everything does, eventually – the M16 will always be a part of gun history, as the gun that defined the second half of the 20th century for the United States military.

Thanks for stopping by Edumuch.com!