I’ve been hearing these kinds of questions asked a lot lately, and I’m guessing many of you have been hearing them as well. As a child of the 90’s, it’s hard for me to accept that I need to explain what Pokemon is to some of our readers. The franchise was such an immense part of my childhood – the thought that anyone is completely unfamiliar with it is pretty hard to believe. However, in case some of you really are Poke-ignorant, Pokemon is a media franchise based on “pocket monsters” – fictional creatures with powers that can be caught, trained, and battled by ‘trainers’ – you, the players. The Pokemon franchise, owned and operated by Nintendo, features video games, a TV series, a movie franchise, a card game, toys, collectibles, and more. In the late 1990’s, “Pokemania” struck a chord around the world as the Japanese-originated, all-around superpower media franchise reached what was its peak in popularity. At one point, the Pokemon brand held the titles for best-selling video game, most watched animated show, top-selling card game, and biggest box office hit – simultaneously. The franchise was eventually dismissed as a ‘fad’ of the 90’s as its popularity settled, but it has never gone away, continuing to produce its annual installments of games, movies, and TV episodes to the delight of Pokemon’s core audience. 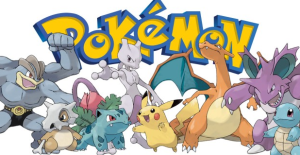 Having fallen from its previous levels of mainstream popularity and success, the Nintendo product has been leaning on their niche but loyal and substantial fanbase to continue supporting Pokemon. That is, until now, with the release of Pokemon Go – a new mobile Pokmeon game that implements augmented reality and has launched Pokemon and Nintendo to the forefront of the mainstream once again.

On April 1, 2014, Google launched a fake, April Fool’s Day Pokemon-competition in which contestants would compete to find all of the Pokemon listed on Google Maps real-world locations. The phony competition was

accompanied by a well-made YouTube video which drew widespread positive feedback – the idea of a Pokemon game that implemented augmented reality and Pokemon-capturing in the real world was clearly something that appealed to a lot of people. Nintendo’s hierarchy realized that not only was this a potential hit of a game, it was something that, through the magic of smartphone cameras and mapping, was actually achievable.

Although Nintendo has always been hesitant to jump into the mobile gaming market, the response to this prank was enough to convince the company to take the plunge. The hook in the Pokemon games is in the fantasy of living in the Pokemon world and being a Pokemon trainer – even if technological limitations of the past held the franchise back from giving gamers a deeper experience . With Pokemon Go, players can come closer to living out that fantasy. After partnering with software development company Niantic, development and production of Pokemon Go began, and after some fast-tracking due to strong customer anticipation (Nintendo played an ad during the Super Bowl, the highlight of a heavy marketing blitz), Pokemon Go was approved for beta testing in early 2016. The game fully launched on all platforms in July 2016.

Available on both Android and iOS, Pokemon Go is a free-to-play, location-based augmented reality game. In Pokemon Go, players can capture, battle, and train virtual Pokemon who appear throughout the real world map, which is built into the game. As players move around in the real world, their custom avatar moves about the game map, encountering wild Pokemon and different game-based locations, such as Pokestops or Pokemon Gyms. When a wild Pokemon is encountered, players can engage the Pokemon and view it in augmented reality mode, in which the camera and gyroscope on the players’ smartphone displays a real-time animation of the Pokemon as though it were in the real world. Niantic, the developer of the game, used the engine from one of their previous games, Ingress, to create the foundation for the mapping system. In Ingress, players were rewarded for logging different sites and monuments throughout the world – these locations are now real-world Pokestops in Pokemon Go, or locations at which players can gain experience to further their progress and obtain free items to use in the game. Pokemon gyms are also mapped at these locations, at which players can battle other Pokemon trainers. There are a number of revolutionary elements to Pokemon Go that have helped turn it into one of the greatest cultural phenomena of modern times – but it is these two elements – real world mapping, and augmented reality – that have set it apart and turned it into such a viral, popular game.

The object of the game is to encounter and catch as many Pokemon as possible, while also levelling up and evolving these Pokemon for the purpose of defeating other trainers in battle and winning Pokemon gyms. Unlike other Pokemon games, players do not battle Pokemon in order to weaken and capture them – when engaged, in order to capture a Pokemon, a player must a throw a Pokeball at the Pokemon accurately in a sort of mini-game. After catching a Pokemon, players are rewarded with a certain amount of ‘candies’ and ‘stardust’ – each of which is used to grow the Pokemon’s CP (combat 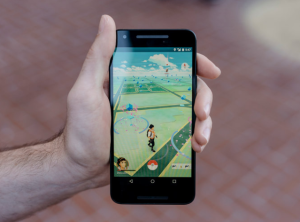 power) and evolve them. If the same Pokemon is captured more than once – a common occurrence – players can transfer the duplicate Pokemon for more candies and to create room for more Pokemon. It’s a fairly straight-forward system.

Players themselves level up and advance in rank as they gain more in-game experience. After reaching level five, players are given the choice of joining one of three teams – Team Mystic, Team Valor, or Team Instinct – and battling at gyms. If challenging a gym that is controlled, or held, by a player that is on an opposing team, players can battle the leader in an attempt to lower the gym’s “prestige”. Once the prestige level reaches zero, the player assumes control of the gym and deposits a Pokemon of his own to defend the gym from challengers. Players can upgrade the prestige level of gyms held by members of their own team by battling the leader. Although the game is free-to-play, there are in-game purchases available for users who want to buy upgrades or more items, such as Pokeballs to catch Pokemon or ‘Incense’ to lure more wild Pokemon.

Why is Pokemon Go So Popular?

Pokemon Go is, quite simply, the right game at the right time. In addition to the overwhelming nostalgia factor that weighs heavy for many young adults who grew up with Pokemon, the game implements simple yet groundbreaking features that excite players – namely, the augmented reality and real-world mapping. Both of these features have been seen in games before, but never have they been seen on this scale or utilized this well – it’s hard to imagine something that would lend itself better to either feature than Pokemon. 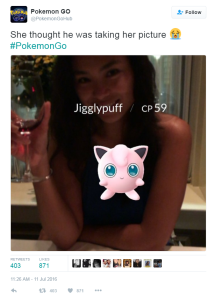 The augmented reality Pokemon encounters can be ‘screenshotted’ and shared over various forms of social media – virtually everyone has seen pictures of Pokemon in hilarious real-world situations somewhere. Even those who are unfamiliar with Pokemon have been getting in on the action, or otherwise talking about the fact that they’re in the minority in terms of not being interested in the game. It’s hard to imagine better viral marketing for a game than this – free, widespread, genuine gameplay sharing, discussion and promotion between real players – what could be better?

Secondly, the mapping element of the game dictates that Pokemon Go be played, well, on-the-go. In order to encounter more Pokemon, players must move to different locations – not only do Pokemon need to be sought out and found, different Pokemon are found in different but sensible locations. For example, players are much more likely to find water-type Pokemon when they themselves are near real-world bodies of water, and more likely to find electric Pokemon when in and around industrial areas. The on-the-go nature of the game also promotes walking and travelling between Pokestops and Pokemon gyms. Not only has the game led to a lot of personal interaction between players (users everywhere are reporting seeing and meeting masses of other players while playing), it has been praised for encouraging and promoting exercise from its users – ultimately, you have to move to play the game.

What’s Next for Pokemon Go?

There’s no way Pokemon Go can keep this up, right? Eventually players will stop playing en masse and the whole thing will be forgotten, just like those other fad-mobile games, right? Well, maybe, and maybe not. The truth is, to compare Pokemon Go to any other mobile game would be disingenuous. Pokemon Go has already reached a greater level of success than any mobile game ever made – the game is the top download in both the iOS app store and the Google Play store, features more active users than Twitter, has been downloaded more times than Tinder, and sees its users logging more average time daily than any app in the world, including Facebook or Whatsapp. Clearly, Pokemon Go transcends the traditional limitations associated with mobile games – it’s more than just a craze or a game – it is, in fact, a phenomenon. Since the launch of the game, Pokemon Go has grossed an average of $1.6 million daily via in-game purchases and Nintendo has added $12 billion to its market value – yes, that’s billion with a ‘b’.

Still, some regression seems inevitable – the game exists as a fascination for some, a fleeting distraction as opposed to something sustainable. Ultimately, a lot of people have a tendency to jump on the bandwagon of

whatever the hottest game or trend is and can’t be counted on to continue playing the game long-term. However, with that being said, that doesn’t mean Pokemon Go isn’t here to stay. Pokemon Go developers have already announced a fleet of updates and advances which are yet to come – global leaderboards, enhanced augmented reality, and Pokémon trading between players to name a few – and there is no doubt that a large core of its users are, in fact, ‘keepers’. The core Pokemon fans who have continued to support the franchise long after the “Pokemania” of the 1990’s are not going anywhere, and that counts for quite a lot – as of March, 2016, the latest installment of the main Pokemon video game franchise had sold 12-million copies worldwide (the game has retailed for $40). More so, there are two other types of users who are likely to have long-term interest in the game – gamers who have been waiting for these sorts of technological features to be successfully implemented into a game, and video game fans who are glad to have re-discovered Pokemon.

At the moment, it’s tough to measure what kind of ripple effect Pokemon Go will have, but there is no doubt that it will be a far-reaching one. In addition to pushing an obscure video game franchise to the forefront of the mainstream once again and reversing the fortunes of a struggling video game company, Pokemon Go has introduced the mainstream world to augmented reality gaming – and the world will now want more. Developers have been trying to introduce accessible virtual  or augmented reality gaming for some time, and now that Pokemon has shown the world how it’s done, there’s no doubt it’s here to stay. Be on the lookout for similar, ‘copycat’ games that try to build off of Pokemon Go’s success, and be on the lookout as well for advancement and development of VR gaming in general. Developers are always trying to give the people what they want, and what the people now want is augmented reality, real-world mapping, and, apparently, Pokemon.

Thanks for checking out our Pokemon Go feature!