Adjectives are difficult to learn for some, but as with anything linguistic:  practice makes perfect.

What is an adjective?  Adjectives are used to modify, describe, or change a person, place, thing, idea. Basically, almost any noun can be modified with the use of adjectives which are called pre- and post-modifiers. 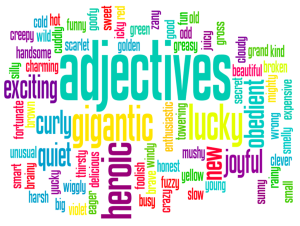 The use of adjectives is crucial, since it gives us an idea of the noun and its properties. Examples:

The red shirt was one which he wore constantly

The fastest runner was honored with an Olympic gold medal

The original Star Wars was a great trilogy

More often than not, the noun which is being modified comes after the adjective. Adjectives are a great way to spice up your text, but beware. Too many adjectives can render a sentence or paragraph completely ineffective and hard to understand. On the other hand, a well-placed adjective is a great addition to a sentence, and it can enhance the text and give it color.

Degrees of adjectives change. They are used to compare or contrast, and to make a generalization. These are three, and they are known as the positive, the comparative, and the superlative.

Mary’s lamb is cute, her sister’s dog is cuter, and her father’s horse is the cutest.

The positive refers to a single, the comparative to a pair, and the superlative to three or more. However, saying that something is the most cutest thing you ever saw, is incorrect. Saying one dog is the more cuter of the two is also incorrect. The suffix changes with the noun, but there is no addition to these adjectives.

Of course, to every rule there are exceptions. Here are several examples or adjectives which do not follow the –er and –est rule. First of all, words with two syllables or more which end in y, such as: happy, lucky, and crumby. The suffix has an additional i added to it. Happy becomes happiest. Lucky becomes luckiest.

Furthermore, there are certain words which act differently altogether. Examples:

Some nouns do not play a part in the adjective degrees game. Certain words have their measure or comparison built right in. Words like entire or universal. They cannot be pre-modified like regular nouns, because they already encompass a certain amount or other measure.

Another use of adjective is with an as-as comparison, which denotes equality. Examples:

This handbag is as useful as it is becoming

This guy is as dumb as his father

When using a superlative with the word very (which is an intensifier), a determiner is also needed. Examples:
He is wearing his very best suit for his interview.

She is making a dish out of the very finest ingredients

Usually, most words are covered by the suffixes –er and –est. certain words require an i beforehand, and some words cannot be used in that fashion at all. The proper use of adjective can make your speech and written word a lot more comprehensible. Using the right adjective can help a sentence stand out, as I stated earlier. Just don’t overdo it. Soon enough, in time and with some practice, you will be able to identify the correct uses of adjectives and their different suffixes.