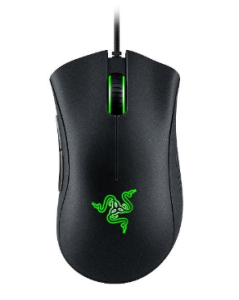 In 2014, Razer introduced the newest addition to its long line of high-quality gaming peripherals – the DeathAdder Chroma gaming mouse. Razer has been making excellent gaming products ever since 1999 (starting with their ball-operated Boomslang mouse), and it has amassed a cult-like following in the process. Razer sponsors individuals, teams, tournaments, and other game-related events. It also has a small chain of stores around the world. The original DeathAdder mouse was first introduced in 2007, and it has undergone several changes and upgrades since. Let’s take a look at some of the technical specifications for the Chroma, the latest DeathAdder model:

The sensor may be the heart of any mouse, but a challenge which proves to be just as real for mouse manufacturers is finding that sweet spot between comfort and grip. You need to have a mouse which is easy to wield and which feels right in your hand. Gaming mice (mouses, for you nitpickers out there…) are built for extended use, the good ones anyway, and they are meant to last. This one is no exception. Left-handed players – so sorry, but there is no left-handed version yet.

The Chroma requires an internet connection for initial activation of the full features, and for future software updates. The mouse also requires you set up a Razer Synapse account, which acts as a very friendly user interface. Synapse is Razer’s gaming cloud, and it is one of the first of its kind. And, for just a split second, let’s talk about the colors, because that is really what sets the Chroma apart. Razer did make some improvements since the DeathAdder 2013 (more on that later), but the colors are a real treat. Full spectrum, with 16.8 million customizable options. It looks great, and it looks even better on a keyboard, nudge nudge.

As Min-Liang Tan, Razer co-founder and CEO, said at the Chroma’s release: “Chroma represents more than just multicolor. It opens up limitless personalization options for gamers to play with, and we even have a Chroma Software Developer Kit for game developers to integrate their games to provide even more customization in the future.”

So, let’s start with the price. 70 bucks is a lot of money, without a doubt, but you certainly get what you pay for. The DeathAdder Chroma is one of the most advanced gaming devices in the world, and it is worth the money. Although, if $70 is a scary number, do not fret – you can find it for cheaper prices occasionally. Do your research, because good deals are popping up all over! 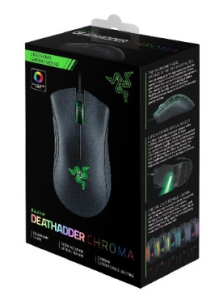 Are there more basic, more moderately priced optical gaming mouse options out there? Of course. But, one other hand, they are not Razer. There is a reason why this company has been at the forefront of the modern gaming industry. Razer is committed to excellence and innovation. They are not just following the pack, but are leading it. They are standard-setters and bar-lifters, and for that this company has gained the respect of gamers and industry experts alike. If you can afford it, definitely check it out. It is a price which provides you with the kind of peace of mind which not all mice can deliver. When you are with that thing in your hand, you are in control.

The advertised approximated weight of the DeathAdder Chroma is 0.23 lbs., but it seems that that weight also includes the cable. The actual weight of this mouse is closer to 0.21 lbs., which to some may be significant. When you are dealing with this much concentration and weight-shifting, every bit counts. If you can be a bit lighter than your opponent, you have just gained an advantage. And let’s face it: in the cutthroat, fast-paced, fragalicious world of gaming (thinking of FPSs in particular here, but it still applies to many other genres), you need to grab hold of every advantage you can get, and use it to kick some ass.

Games are all different, and many of them require different means of control. Instead of constantly changing the configurations of your mouse – and wasting valuable game time in the process – you can now take advantage of the Razer Synapse cloud service, and store unlimited profiles and configurations to the cloud.

Register your Razer DeathAdder Chroma, add it to Synapse, and navigate easily between your different control options. Synapse will serve as a wingman of sorts, providing you with the ways and means of optimizing your Razer products, and getting them to a point where they are personalized to perfection. A good gamer understands his equipment, but a great gamer makes it his own. Customization is not just logos and color schemes – it is about getting to a degree of control and motoric abilities which can be as subtle as they are effective. Having a mouse like the DeathAdder facilitates that desire for fine tuning which many gamers shoot for, and it gives the player everything he or she needs to succeed.

With the help of Razer Synapse, the DeathAdder-wielding gamer can add macros to the mouse, and make it that much more convenient and personalized. In some gaming servers/platforms there are rules against using macros, for fear of players using them to create an unfair advantage. Generally speaking, in competitive play, the use of macros is discouraged, and in some cases it can get you kicked, suspended, or even banned. Make sure to abide by the local server/platform’s rules and regulations. The Valve Anti-Cheat (VAC) system, for instance, can be used to detect certain scripts and macros. Be aware of where, how, and when you are using the DeathAdder’s macro-creating ability, since it may be considered by some gamers to be an overpowering way of gaming, bordering on cheating.

As one of the world’s leading designers and manufacturers of gaming and game-related products, there aren’t too many known (or otherwise consistent) issues with the mice which Razer make. Some DeathAdder technology is original and proprietary, while some is copied and enhanced. By copied I don’t mean stolen, I simply mean that it isn’t Razer’s own invention or innovation.

Two of the most common issues with the DeathAdder series are:

Parts breaking definitely calls for customer support, but the tracking issues can usually be solved by recalibration or changing the settings on Synapse. Sometimes, the stat tracker will cause problems, and disabling it could solve the issue. These are just two issues which I saw appear in several forums, but it would seem that these mice work just fine for a good percentage of customers. The problems of scroll breakage and bad tracking certainly do not apply to everyone. After all, a gaming mouse is a device which is used with high frequency, sometimes for hours at a time. It is very difficult to compare one case to the other. It depends on so many factors, but the point is that if the DeathAdder had issues which were consistent, I don’t believe it would have made it past Razer’s internal and external quality control.

Now, it is important to note that Razer offers a limited 2-year warranty on the DeathAdder (like its other mice). It is also important to mention that any physical modifications or alterations made to the DeathAdder could make the warranty null and void. The best way to get support is to contact Razer, even if the warranty has expired, just to see what you are up against. And, there is one last issue which is a glitch not in the mouse itself, but in the software which is relies on.

The double-click issue is well documented, but it comes up more in the 2013 version. Still, it may happen in the Chroma, too. Essentially, it is exactly what it sounds like. You click once, but the computer picks up two clicks. Annoying, frustrating, and sometimes significant, this issue has been debated. Some users took their mice apart and started to fiddle, replace, and modify. Some users threw it out and bought another mouse.

Some users turned to Razer’s customer support. I never had to deal with Razer customer service, so I can’t say how wonderful or horrible their support reps are. Those users – who were experiencing double-click issues and sought help from the company – were told that the problem was with the firmware. Razer sent them a link to an update, and the problem was solved. And since we are talking about malfunctions, let me give you my two cents:

Now, you can argue on whether or not a company should be held responsible for releasing a product, when they haven’t sorted out all of the bugs. Some companies do it more than others. I know from my short experience as a technical writer for software, that some of the best and most efficient problem-solving is best conducted on the end-user level. If you have issue when you are under warranty, go ahead and use the warranty. I agree though, that a company shouldn’t use the warranty period as an excuse for distributing faulty goods.

Suit up for intense action and get your hands on the @Razer Deathadder Chroma!

I don’t think that it’s the case with the DeathAdder, though. It’s a good mouse, with a few faulty units here and there. No factory-made product escapes the harsh statistics of the matter. And, the numbers and laws of probability prove that there is no way that every single one of the DeathAdder mice will be perfect, not even when they were created on the same assembly line. So, if you have something wrong with your DeathAdder, get in touch with Razer. As for the double-click issue, the problem was the software. But, there are other issues which may arise. Ones which may not be solved by simply updating software, cleaning the sensor with Q-tip and rubbing alcohol, or banging the mouse repeatedly against the mouse mat at 3 AM when you are trying to finally get the best of that insufferable Paladin from Westchester. Razer seems to have fixed that issue when they came out with the Chroma version.

The Razer DeathAdder Chroma is a thing of beauty, inside and out. It is made of materials which are meant to help it last way beyond the expiration date on your warranty. If Razer were making products which break after a year or two, they would no longer be in business. Are there some units which may be faulty? Of course. But, that still isn’t enough to smear the entire Razer line or its DeathAdder series, as far as I am concerned.

I got into gaming in high-school, with my PS3. It may not have been the best idea, seeing as how I had no real knowledge of what I wanted to do after high-school… well, it’s all in the past. I was never a very serious gamer, but I loved playing. I can still remember seeing that iconic Razer logo and the symbol of the three-headed snake in the shop where I purchased games for my PC/console. I would drool over the catalog, envision all kinds of scenarios in which I would own those cool peripherals, and read up about them. Razer was always known as a company which you can trust. Its two founders really fought to establish the company, back in 2005. They wanted to give gamers all over the world higher standard systems and better quality products. Razer was a company which has limitless potential, because just like its slogan says, it is “for gamers, by gamers”. And that means a lot.

Want to learn more about Razer products? Check back for more features on Razer here at EduMuch!