As a child, I would often be reminded by my mother not to sit too close to the TV, lest the bright lights and glare from the screen hurt my eyes or even cause them serious damage. Us kids would always laugh off these warnings as ridiculous and continue enjoying our favorite shows, but now that we are adults, it’s easy to see how constant exposure to harshly lit screens is not good for our eyes.

Everywhere you look today, someone is on his computer, tablet, phone, or other electronic device. It’s bad enough that we are constantly “plugged in” during the daytime, but the more serious issues arise at night, when the glare interferes with our body’s natural sleep cycle and can contribute to a poor night’s sleep, day after day. The average person reading on a tablet for several hours before bed may find that their sleep is delayed by approximately one hour. Most of us have heard the warning to limit our screen time in the hours leading up to sleep, but the reality is that many of us still continue staring off into our electronic devices until late hours of the night. What a sight we must be, ghostlike blue glows emanating from our laptops in the wee hours of the morning, casting demonic shadows upon our faces.

Exposure to this sort of light during the nighttime can affect our circadian rhythm and reprogram our sleeping patterns. If you’ve ever experienced the phenomenon of barely being able to keep your eyes open at work, only to come home and find yourself wide awake at night and unable to fall asleep, then you too have fallen victim to this unfortunate shift in your natural waking/sleeping hours.

There are so many reasons why it’s important to get a solid, restful night’s sleep. Sleeping helps keep the immune system healthy, and protects the body against colds and other types of sickness. People who get a better night’s sleep enjoy clearer skin, a faster metabolism, and an all-around more attractive appearance. This, compared with when their bodies are sleep deprived which results in bleary eyes and an overall dull complexion.

Not only do well-rested people feel better and less tired during the day, they are more productive at work and have faster reaction times. On the flip side, overtired workers have sharp drops in their productivity. There is even evidence to suggest that one and a half weeks’ worth of getting only 6 hours of sleep each night can have the same effect on the body as staying awake for 24 hours straight. In other words, if you wouldn’t come to your job and expect to put in a good day’s work after pulling an all-nighter – don’t be surprised when continually getting a poor night’s sleep has the same impact on your productivity.

How f.lux Software Can Help You Catch ZZZs

Enter f.lux, a free downloadable program designed to adapt your computer’s display colors and brightness to the time of day, in order to help shift your body into more natural sleep patterns. The first step to reprogramming your body is to make clear distinctions between “day” and “night”, and this is where f.lux comes in. The idea is that looking into an LCD screen is equivalent to looking into sunlight, which is fine during the day but definitely not such a great idea at night.

With and Without flux

By using f.lux, your screen brightness will adjust depending on the  ebb and flow of natural light, so the colors will look usual during the daytime hours but warmer at night, with a tint that is more orange-yellow than blue. In other words, once the sun sets, f.lux causes your screen to look like indoor lights rather than sunlight. f.lux asks users for their location as well as the type of lighting in their home, and the options for lighting type are dependent upon your operating system. Microsoft Windows users can select either halogen, fluorescent, daylight, incandescent, dim incandescent, candle, or ember lighting. For the OS X and iOS versions, the available choices are candle, tungsten, halogen, fluorescent, and daylight.

In this way, the flux program is beneficial not only to you, but also to whomever you happen to share a room with. Your sibling, roommate, or significant other will be thankful to no longer be kept awake by that annoying blue light which illuminates the whole room. They will appreciate the extra much-needed sleep.

f.lux is available for Microsoft Windows, Linux, Mac computers, iPhones, and iPads. An Android version is currently in the works. To use the program, first you must ensure that your computer is set to the accurate local time zone. Since otherwise f.lux will transition to night mode at the incorrect time. Something to be aware of is that the program does not currently work for locations above 65° N. Once you have set up the program to your liking, it calculates the time of day and does the rest automatically, fading away into the background to take care of things and let you forget all about it.

When using flux software for the first time, it can take a little playing around to adjust the color temperature sliders to the desired effect.

The OS X version can even be set to automatically enable a Mac’s “dark theme” at night.

f.lux’s default setting is to shift from regular mode to night mode quite quickly, so some users may wish to adjust this transition to the “slow” setting, which more accurately reflects the gradual setting of the sun and warming of outdoor light.

At first, f.lux may appear very pink, but users have reported that after several minutes, it should start looking normal. Once you’ve adjusted to f.lux, you may even find that after disabling it, everything else looks blue in comparison. It’s worthwhile to note that f.lux does not make any permanent changes to your computer, and if and when you choose to disable it, your monitor will go back to its previous settings for color calibration.

For users who require complete accuracy in their colors, such as artists or designers, there is a setting to disable f.lux for an hour at a time, during which time the screen resumes its normal settings. There is a further option to disable it for 2.5 hours in “Movie Mode”, which is available for both Windows and OS X, and enables the viewer enough time to watch a typical length movie. The movie mode is meant to strike a balance between a warmer color tone that still manages to preserve sky colors and shadow detail.

Lastly, for those who really do need to get working, they can go into the software settings and choose to “disable until morning”. Just be sure not to take advantage of this too often, so your eyes don’t suffer in the long run!

f.lux can even accommodate individuals who work nights by flipping the day and night settings on their computers, but this  feature is currently only available for PC users. The team behind f.lux have stated that they are working on a setting to allow users more close control over the time settings.

The Science Behind flux

There have not yet been any studies linking f.lux with better sleep, but there is scientific evidence that a decrease in exposure to blue light at night time is associated with increased melatonin. Melatonin is a hormone produced by a small gland in the brain which is responsible for controlling our sleep/wake cycles. Generally, melatonin levels start to rise in the evening, remain high throughout most of the nighttime, and then begin to drop in the early hours of the morning. The body’s production of melatonin is impacted by light, which is why during the shorter days of winter, our bodies may begin producing melatonin earlier or later in the day than is typical for us. Therefore, when we cut back on blue light before bedtime, our melatonin production continues undisturbed, thus signaling our brain that it’s time to go to sleep. 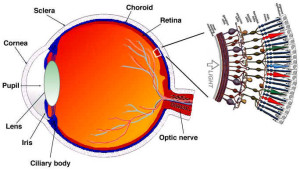 Furthermore, you may recall learning in school about rods and cones, photoreceptors in the eye that enable us to see black & white and color, respectively. In recent years, however, scientists have discovered another type of photoreceptor, called melanopsin, which is particularly sensitive to a narrow band of blue light and has an impact on circadian rhythm. Unlike rods and cones, which play no part in the onset of sleep by light, research has suggested that melanopsin may affect wakefulness and sleep cycles by suppressing melatonin production. In this regard, while an ideal situation would require us to turn off our computers entirely far in advance of our going to sleep, f.lux can at the very least eliminate the issue of blue light specifically and stop this light from pushing back our natural sleep cycles.

In addition to the typical f.lux setting which cuts back on blue light, the “darkroom mode” eliminates blue light entirely by inverting colors and using only the colors of red, white, and black.

Android users, who at present cannot use f.lux software, may be interested in a comparable app called Twilight, which also filters out blue light after sunset and uses a reddish filter to soften colors. And, like, f.lux, the program adjusts itself based on the sun cycle at the user’s particular location.

So how does f.lux stack up against other, alternative methods for reducing brightness and making screen time easier on the eyes? For Macbook users, who are already familiar with the ambient light sensor setting, you will come to find that these two features differ but can be used in conjunction with one another. While the ambient light sensor adjusts the screen’s brightness based on the amount of light in the room, f.lux changes the color of your screen – not the brightness – and furthermore it deals specifically with time of day, in addition to the amount of light in the room.

One of the biggest names in the screen-brightness reduction game is Gunnar, whose line of computer glasses are designed to cut back on glare for those who spend long hours in front of computer screens. Gunnar glasses come in a variety of styles, including glasses designed specifically for gamers, glasses designed for outdoor use as well as indoor, and prescription glasses that correct the eyesight while also protecting the eyes.

The constant switching between screens and natural lighting causes quite a strain on our eyes, and forces them to work extra hard. In fact, there is even a new medical term used to describe the dry, irritated eyes; neck and shoulder pain; and headaches associated with spending hours a day in front of a computer: Computer Vision Syndrome (CVS). Gunnar glasses are designed specifically to ease this transition on the eyes, and to protect the windows by which we view the world.

Gunnar glasses are very highly recommended by users, who extol their many virtues. Quite a number of users have also reported that they use both Gunnar glasses and f.lux, as each addresses a slightly different issue, and the combination of both can significantly cut back on eye problems.

In short, f.lux program is highly useful and effective, and you can’t beat the price – free! Once you’ve experienced all of the positive effects of reducing blue light before bed, or even eliminating it entirely, you’ll wonder why you didn’t switch over years ago.