Name brands often feature a trademark, signature product that people associate with that brand more than anything else. Apple has the iPhone, McDonalds has the Big Mac, Nike has Jordan’s, and SIG Sauer has the P226 handgun. A full-sized service pistol, along with the Glock 19,the SIG Sauer P226 is one of the most widely-used handguns in law enforcement and military agencies worldwide, and has spawned several different handguns that feature the same P226 DNA.

The flagship offering of SIG Sauer, a gun manufacturer for over 150 years, the P226 serves as an improvement on the P220, a single stack, 9x19mm parabellum handgun and the P226 predecessor. Featuring a beautiful and aesthetic look, a high build quality and attention to detail, an easy to use design, and accurate and reliable shooting, it’s not hard to see why the P226 is so popular, as we will detail in this, our SIG P226 Handgun Review. 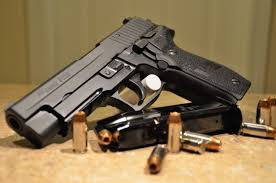 In 1975, SIG, in conjunction with J.P. Sauer & Sohn (a German gun manufacturer), developed a new handgun, the SIG Sauer P220. The first Sig Sauer handgun to be shipped to and sold in the United States, the P220 was a refined version of the SIG P210, which had been the primary offering of the company. After finding success selling the P220, Sig was emboldened and decided to produce a more advanced model handgun, the P226. Designed for entry into trials held by the United States military to find replacements for their standard issue, outdated handguns, the P226 was one of two handguns (along with the Beretta 92SBF) to be deemed fully satisfactory by the United States military. Although the P226 did not win the US Army contract (the Beretta 92SBF was cheaper than the P226, which was ultimately the deciding factor), the praise and attention that the P226 received as a result of this put it – as well as all of SIG – on the map and set the company and gun up for more future success. This success included the introduction of the SIG P228 a handgun that evolved from the P226. 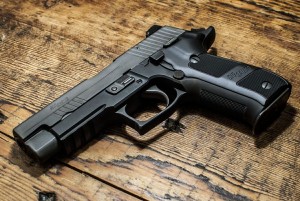 The P226 comes in a number of differing models and types, but the general makeup of each P226 gun is the same. The recoil is very manageable – for a handgun that packs this kind of punch, the kick of the gun is surprisingly light and easy to handle, thanks in large part to the balance and weight of the gun. All P226 models will fit large hands extremely well – the gun was designed to fit those who favor a larger grip – but the more recent iterations of the gun feature an updated frame that accommodates smaller hands better, with easier grip and finger-to-trigger placement. It comes down to the individual (hand size as well as personal preferences) in terms of how good the P226 will feel in hand, but the gun is a proven crowd pleaser – you’d be hard pressed to find a gun owner who doesn’t find the P226 agreeable.

As is the case with all SIG Sauer guns, the P226 comes equipped with SIG’s patented four-point safety system. Implemented in place of the traditional safety switch that is featured in most hand guns, SIG’s safety system is designed to provide a more comprehensive set of fail safes than are generally found in guns. The four-point system breaks down as follows: 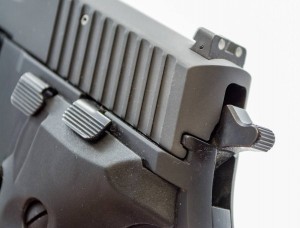 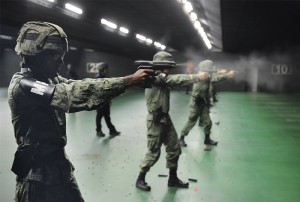 The P226 features a standard double-action/single-action trigger configuration, although there are different options available in the different P226 variants as well as for those who want to customize their P226. The trigger is remarkably reliable – even after thousands of rounds fired, the trigger stays true and crisp – the first long trigger-pull and the subsequent short pulls feel as good after a year of use as they did on day one. The defining quality of the P226 is undoubtedly its reliability – this is evidenced by the widespread use of the gun in a vast range of military and law enforcement capacities. This sees the gun in action in various types of settings and climates, tests to which it always stands up – the bottom line is, this is a highly durable weapon. The magazine release button is easily accessible but strategically located to avoid incidental contact, and the gun is one of the most simply disassembled and reassembled handguns ever constructed.

The P226 series features over twenty different variants that come equipped with slightly different features, the highlights of which are as follows: 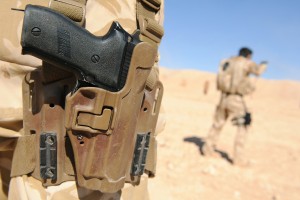 P226 Rail – Now the standard P226 gun, the Rail simply comes equipped with a rail on the underside of the frame for easy accessorizing.

P226 Tactical – As implied by the name, the Tactical is made for tactical purposes, as the extended and threaded barrel accepts suppressors easily.

P226 Navy – Manufactured for the US Navy Seals, the P226 Navy features a stainless steel slide engraved with an anchor to symbolize their naval status. The P226 MK25 is essentially the Navy version of the P226 but marketed towards civilians.

P226 ST – Made with stainless steel instead of aluminum, the ST features a heavier weight than the standard P226. This provides lessened recoil, as well as quicker return to target between shots.

The SIG Sauer P226 is one of the most heralded handguns in history, and for good reason. The gun is safe, reliable, consistent, and well-known, meaning that support in the form of repairs, accessories, and customization will always be readily available. The gun is a bit on the expensive side, but given the lifetime warranty and the quality of SIG’s build, you can rest assured you’re getting quality when you pick up a P226 (for those looking for a more affordable alternative you can read our SIG P226 vs Glock 17 review). Since the introduction and various new iterations of the P226, SIG Sauer has grown to new heights, but they owe it all to this gun – the P226, the gun that changed the game forever.

(To many in the gun world the only competition the SIG Sauers have is from the Glock company, their polymer based pistols are famous amongst gun aficionados. For a more in-depth look at these firearms take a look at our Glock 17 vs 19)