So you’ve decided to give in to the peer pressure and download Pokemon Go? Or, you live in one of those less fortunate countries and only just received access to the game? Either way, welcome to the party! Pokemon Go is, to put it simply, a phenomenon. The fastest growing mobile game in history, Pokemon Go has raised Nintendo’s valuation by $12 billion, attracted more active users than Twitter, and even managed to get American kids outdoors and exercising in the summer time – all in its first week of release! The free-to-play (in-app purchases are available), augmented reality game is available for iOS and in the Google Play Store and has users around the world steeped in Pokemania like it’s 1999. It’s a pretty competitive game – between collecting Pokemon, levelling up your character, and battling over Pokemon gyms – there are plenty of bragging rights to be won. Ready to find out how to play Pokemon Go so that you too can begin your journey towards becoming a Pokemon Master? Let’s get started!

How Does Pokemon Go Work? 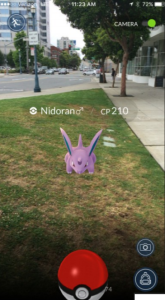 Pokemon Go uses augmented reality via phone cameras and gyroscopes, as well as real-world mapping via phone GPS, to send you on a real-life Pokemon journey. In order to catch Pokemon, who appear to you in the real world through your phone camera and screen (the AR element of the game), players must travel the world and find Pokemon ‘on-the-go’ – literally. The movements of your in-game avatar correspond to your real-life movements – if you stay on the couch all day, so too will your avatar, and you won’t be finding many Pokemon. By playing the game while travelling, you are more likely to encounter wild Pokemon who you can capture. The game even responds to the sorts of locations you’re travelling to – water Pokemon are more likely to be found when you’re near real-life bodies of water, for example. The object of the game is not just, as the Pokemon slogan states, to “catch em’ all”. Catching Pokemon in Pokemon Go is the primary goal, but that’s really only just the beginning. After capturing Pokemon, they must be strengthened and evolved so that they can battle and win Pokemon gyms. 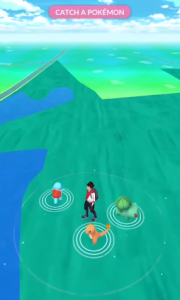 When you start the game, you’ll be greeted by three ‘starter’ Pokemon who are in your immediate vicinity and can be caught – Bulbasaur, Squirtle, and Charmander (just like in the show and original game!). You can catch one of these Pokemon by selecting it and throwing a Pokeball at it in a VR mini-game – there’s no battle that takes place to weaken the Pokemon, unlike the original games. Afterwards, the other two starter Pokemon will disappear. Your next Pokemon won’t be as easy to capture – you need to go out into the world and find them. Generally, Pokemon are more likely to spawn around populated areas, but the more you move, the more Pokemon you’re likely to find – stagnation is not your friend.

You can click on the bottom right corner of your screen to bring up the “Nearby” menu which will show you which Pokemon are in your area. The Pokemon are accompanied by 1-3 ‘footprints’ which indicate how far you are from the Pokemon – 3 footprints indicate that the Pokemon is far, 2 is somewhat close, 1 is very close. When the Pokemon is close enough to be engaged, the phone vibrates and the Pokemon appears on the screen – click on it to start the VR mini-game. Pokemon can be found at different CP (Combat Power) levels, which indicate the battling strength of the Pokemon. To strengthen and evolve Pokemon, users can spend Stardust and Candies which are accumulated by capturing and ‘transferring’ Pokemon. When more than one of the same type of Pokemon is captured, the weaker ones can be transferred in exchange for Stardust and Candies that can be spent to upgrade the stronger Pokemon. Therefore, there will always be incentive to catch more of the same kind of Pokemon. 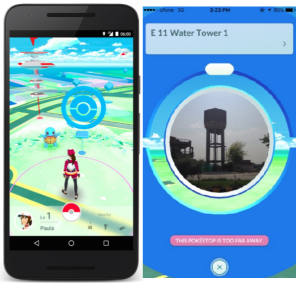 Littered throughout the world map are Pokestops, marked in the form of various landamarks and prominent locations in your area. The primary reason for visiting Pokestops is to acquire items, although they also provide users with experience boosts. Pokestops ‘refresh’ for five minutes after every use, at which point they can be accessed again.

There are a number of in-game items available which can help you progress through your journey. Items can be acquired either by visiting Pokestops, levelling up (more on that soon), or via in-game purchases. The game items are as follows,

-Pokeballs: The most important item in the game are Pokeballs. Used to capture Pokemon, you are given 50 regular Pokeballs to start with and can acquire stronger versions (such as Great Balls, Ultra Balls, and Master Balls) by levelling up in the game. These will come in handy when trying to capture stronger Pokemon.

-Incense: You can use Incense to increase the rate at which you’ll find wild Pokemon for 30 minutes.

-Eggs: Carrying different kinds of Pokemon, Eggs can be carried and hatched to acquire new Pokemon after walking 2km, 5km, or 10km. The longer the walking distance required to hatch the egg, the rarer the Pokemon you will receive.

-Lucky Eggs: Unlike regular Eggs, Lucky Eggs can be used to double XP (experience points, which lead to levelling up) for 30 minutes at a time.

-Lure Module: A Lure Module is, essentially, a communal Incense. When used, all trainers in the vicinity of the module will have an easier time encountering Pokemon. Lure Modules can be used on Pokestops only – players will need to visit the Pokestop that has the Lure Module on it in order to take advantage.

-Razz Berry: These berries make it easier to catch Pokemon. By throwing a Razz Berry at a Pokemon during an encounter, the Pokemon will be more likely to be caught by your Pokeball.

In addition to advancing the level of your Pokemon, you yourself can advance in level as a trainer by experiencing more in the game. You can earn experience (XP) via virtually every in-game activity, which in turn levels up your player. Advancing in level provides you with items and allows you to begin battling: when you reach level 5, you will be given the option of choosing between three different teams to join – Team Valor (Red), Team Mystic (Blue), and Team Instinct (Yellow). The team you choose will not only act as a catalyst for some serious trash-talk, it will determine who your opponents at Pokemon Gyms will be. 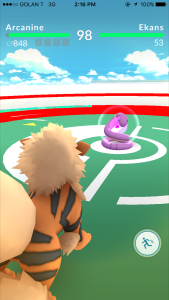 The purpose of strengthening Pokemon is to use them to battle other trainers at Pokemon Gyms. Like Pokestops, Gyms are mapped at different landmarks and locations, and can be won, and held, by defeating other trainers in battle. When you arrive at a gym, you can challenge the ‘leader’ of the opposing gym by battling them with your own Pokemon. If the gym you’re challenging is controlled by a rival team, you can lower the ‘prestige’ level of that gym by winning the battle. Once the prestige level reaches zero, you can assume control of the gym for yourself and your team, at which point you’ll be required to leave a Pokemon of your own behind to defend it (you’ll get the Pokemon back once it is defeated). You can upgrade the prestige level of gyms held by members of your own team by battling their leader and leaving a Pokemon behind to join and fortify its defenses.

Battles themselves are simple, yet satisfying – both your Pokemon and the one you are fighting will appear on screen, at which point you have three options: dodge (swipe left or right), use a regular attack (tap on the enemy Pokemon), or use a special attack (hold down on the enemy Pokemon when your attack bar is full). Advance and evolve your Pokemon CP in order to mount stronger attacks and build a higher health bar.

The Future of Pokemon Go

That’s about it! Pretty simple, right? You’re ready to begin your own Pokemon journey and start down the road towards becoming a Pokemon Master. A number of new features are planned to be released in the future to improve the in-game experience – namely, player-to-player Pokemon trading (a feature that was teased during the first game trailer), global leaderboards, and enhanced augmented reality. There’s no shortage of potential upgrades for the game that is already being hailed as the most innovative, comprehensive mobile gaming experience of all-time. Let’s not forget the fact that we can now only catch about 150 of the roughly 700+ member Pokemon roster – sit tight, because there’s plenty more to come. Make no mistake about it, Pokemon Go is here – and here to stay!

Thanks for checking out our Pokemon Go feature!

Tagged as: pokemon go for beginners, pokemon go guide, What is Pokemon Go