Overwatch is a new, hero-based, first-person shooter from Blizzard. Blizzard – Activision Blizzard, to be precise – are well-known for their high quality, attention to detail, and an uncompromising sense of originality. Many of their games have been recognized as some of the most popular ones in video game history. In fact, Blizzard’s World of Warcraft is still the most popular massive multiplayer online role playing game (MMORPG), many years after its release.

No Two Strategies Are Alike

This is a relatively quick Overwatch heroes strategy guide. No two strategy guides are alike, same as no two players are alike. This is a personal guide, which means it is based on my experiences with the game. It isn’t written in stone, and your mileage may vary. Some people display great proficiency with characters which I seldom use, for instance, thereby making their input and insight into that character more valuable. 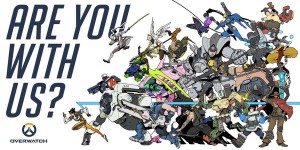 Before we begin, I’ll just say that the one criticism – more like a pet peeve – that I have of this game is its backstory. The developers promise that more content will follow the original May 2016 release, so I am hoping that somehow the premise ties into everything at the end. Overwatch has no single player campaign, so I wonder if the omnic-human war will ever really play a role in the game. Time will tell.

Overwatch is a great game by any standards. Coming at a team VS team configuration only, for now – with competitive play to follow in summer 2016, sources say – it has great graphics, 21 unique heroes to choose from, 12 maps, and 4 game modes. Overwatch’s heroes are members of separate classes: offense, defense, tank, and support, each with their own weapons, designations, functions, and abilities. In most modes and maps, it is only by having a successful combination of classes that the team will be able to win the match.

The four game modes are:

Assault – defend or attack in order to capture or secure points on the map. Time-based.

Escort – a payload is escorted to a specific point by one team, while the enemy team attempts to stop them. Also time-based.

Hybrid – an ‘assault then escort’ scenario, combining the two aforementioned modes into one.

Control – a ‘best of three rounds’ type game, where both teams battle over control of various locations across the map.

The Heroes Of Overwatch

The Heroes in Overwatch have a primary attack, and sometimes a secondary one as well. They also have two abilities (some active, some passive), and an ultimate ability. Each hero has unique weapons, and while these weapons cannot be replaced, it is possible to switch to a different hero mid-game (at the spawning point), making this a very dynamic and exciting kind of situation, no matter the game mode or map being played.

For each hero, there are different attack speeds, cooldown/reload speeds, percentages of damage done, and ways of protecting oneself or a teammate. Blizzard put a lot of thought into creating a game that was as well-balanced as possible, and they are still taking user feedback into account, even after the official release. 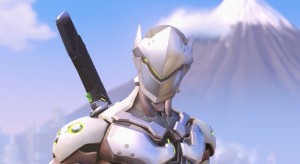 Genji – Genji sure can move. His deadly throwing stars are very accurate, and he also has the possibility of throwing them in a wider spread. This is why it he is best when attacking from relatively up-close. He is dangerous at longer distances, and his high mobility make him difficult to pin down.

McCree – armed with flashbang capabilities and his trusty six-shooter, McCree is a very worthy rival for highly agile characters. He himself is not the fastest hero around, and in longer ranges the damage seems to drop. 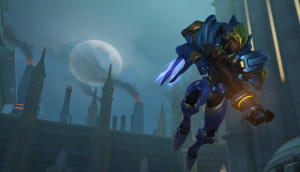 Pharah – she is a hero that can launch herself into the air using her jump pack, which makes for quick getaways and achieving higher ground during battle. She is a good counter-hero to those with short-ranged weapons, such as Junkrat and Winston. 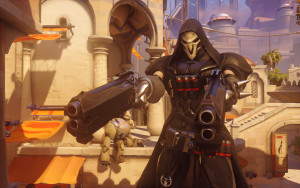 Reaper – This guy means business, with his dual shotguns and wraith-like movements through the map. He is lethal at close range, and is one of the most popular choices for new and old players alike. However, this also means that he is not as effective when in a medium or long-range situations. 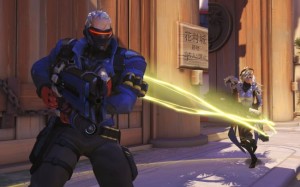 Soldier: 76 – true to his soldier status, 76 is a badass military weapon. He is deadly at any range, and can hold his own when under attack. His ultimate ability isn’t as impressive as the other offense heroes’ abilities, but he is a very fun hero to play with, and an easy one to learn. 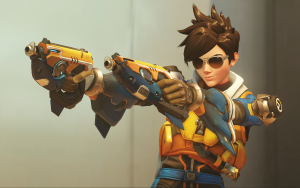 Tracer – armed with dual fully-automatic pulse pistols, Tracer is a hit-and-run kind of character. She can move very quickly, using her blink and recall abilities, and deal heavy damage to any enemy she encounters. These abilities are vital, since Tracer is relatively weak, compared to the other heroes. 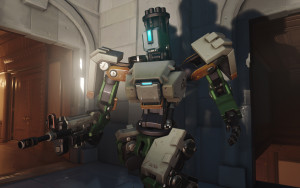 Bastion – Bastion can reconfigure and adapt to the battlefield. When in his recon mode, he is equipped with a submachine gun, and is fully mobile. When in sentry mode, he becomes immobile, and is armed with a Gatling gun. A third configuration – tank – is Bastion’s ultimate ability, making him a serious threat no matter what configuration he is in. 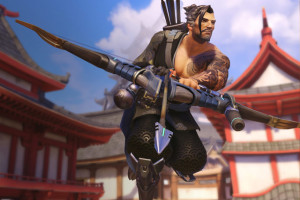 Hanzo – he is a bowman of highest regard, and his weapons are best used in medium and close ranges. He is a sniper, and is great at picking off single units (even tanks!). He can make a headshot kill, and then retreat before his enemies ever get sight of him. He can also use his scatter arrow ability to create choke points, and is dead useful in small corridors. 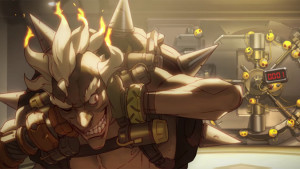 Junkrat – a true defense hero, Junkrat has the ability to leave mines and traps all over the map. His grenade launcher is a weapon that takes some getting used to, since his frags bounce off of walls and objects, and explode after a period of time. It takes skill to master Junkrat’s primary weapon. 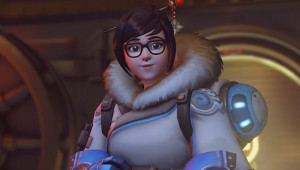 Mei – Mei’s abilities with ice are exceptionally useful for defense. Her walls of ice and cryo-freezing techniques will be able to give any team an advantage, whether attacking or defending. Mei’s blaster, her primary weapon, is not the greatest weapon in my opinion, making her a pretty vulnerable hero. She is best used from afar, to incapacitate enemy units. 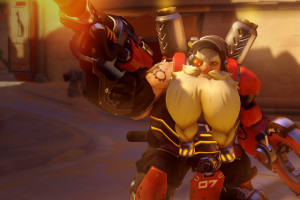 Torbjörn – with the ability to build and maintain turrets, Torbjörn is the go-to defense hero for many players. His primary (and secondary) weapon, the rivet gun, is effective and very useful. His turrets are immobile, and they inflict a lot of damage. Also, they can technically be placed on moving objects, which would provide them with limited motion. 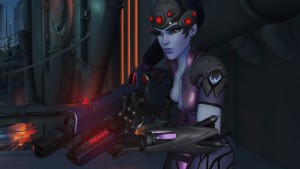 Widowmaker – the game’s ultimate sniper, I think. She is best used from long-range. A well-placed shot from her fully charged rifle, will be able to take down many – if not all – of this game’s heroes. She is not too strong, and is at a clear disadvantage when in close range. Her poisonous mines and ultimate infra-red ability make her a hero you will love to explore. 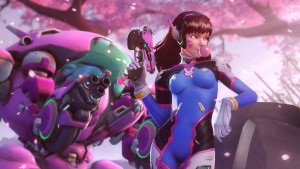 D.Va – though her mechanical suit (aka mech) does grant her the role of a tank in this game, it is not advised to use only her as a tank, since she has relatively low health, and can be picked off easily. In pilot mode, outside of the mech, her mid-range automatic blaster can do a lot of damage. She is more easily countered by Zarya and Mei, since they both shoot non-projectiles through their primary weapons. 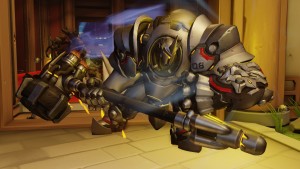 Reinhardt – the best-built of all of tank heroes, Reinhardt and his rocket hammer are right to be feared. He is pretty deadly when on the offense, but is limited in his hammer’s relatively short range. His main attribute is his ability to shield himself and others, by using his barrier field. 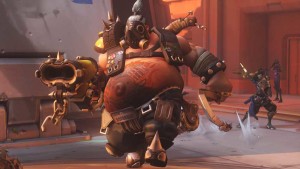 Roadhog – his hook can catch any hero off-guard, and he has the ability to regenerate his health, to a degree. However, he is also a tank without a shield. He is powerful, but vulnerable, and can be countered by heroes such as D.Va, Tracer, and Mei. Roadhog is best used as a flanking unit, who you don’t see coming until it is too late. 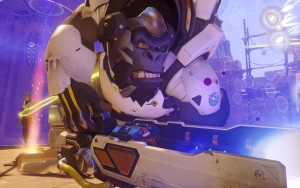 Winston – I feel Winston is all about creating mayhem and disorder. Maybe it’s the ape in him. At any rate, Winston is able to jump and move around at un-tank-like speeds. This makes him a real threat at short ranges, but he begins to lose his touch when out of range. To enemies like Tracer and Genji, Winston fills the slot of good counter-measure. 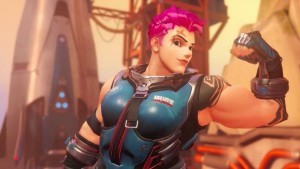 Zarya – she has the ability to absorb damage, and it is what keeps her weapons charged. She can also deal a lot of damage, but can be somewhat difficult to play at first. It takes some getting used to. She is the weakest of the tank units, but she makes up for that with her abilities. When fully charged, and in the hands of a more experienced player, Zarya is almost unstoppable. 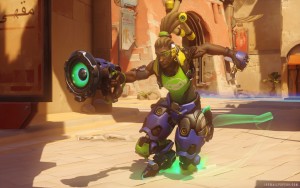 Lúcio – he has the ability to provide his teammates with a huge boost in speed and health, and can also use his music to increase the amount of damage that is being inflicted on his enemies by his teammates. He is perhaps the proverbial “jack of all trades” but a master of none. Indeed, he can heal and damage, but is not the final word on either of those abilities. 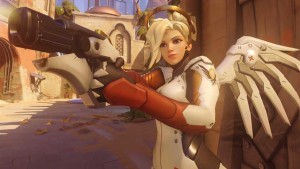 Mercy – this angelic hero is best used as the support line of a tank or offense character. She is somewhat dependent on her team, and functions best when surrounded by her allies. Her blaster works, but it is clearly not her forte. Plus, with the ability to resurrect the dead, she is a natural addition to any team and game mode. 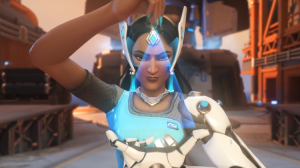 Symmetra – she is categorized as support, but – unlike Mercy – healing is not what she is best known for. Her support comes in the shape of teleporters, turrets, and a photon shield. These can greatly help her teammates’ efforts, and may easily become the difference between victory and defeat. 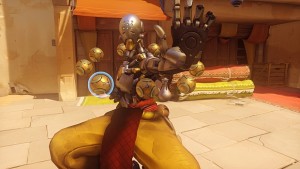 Zenyatta – using orbs of destruction, discord, and harmony, this support hero is a lot more offense-oriented. He is an overlooked hero, in my opinion. When played well – not by me, mind you, I am still working on it – he can be used to sustain a whole team, and deliver heavy damages. However, he is also the weakest of all the heroes, with only 50 health points and a 100-point shield to his name. Use him wisely. He would agree. 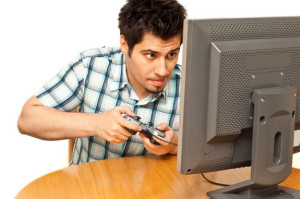 This is just a simple guide. Obviously, the more you play, the more you learn the maps and modes, the better you will become. These heroes are all very different, and they provide a different kind of game play experience. Their respective weapons and abilities – plus, the ability to change a hero mid-game – makes it so no two Overwatch games are ever truly alike. Like I said, very dynamic, and it works to this game’s advantage.

Overwatch is proving to be a hit, and how can it not be? Whether on a PC or console, this multiplayer game is so much fun. The relatively short match times, combined with the long-lasting experience points factor, and the subsequent loot possibilities, make this a game which we would all love to stay addicted to. It has highly re-playable, and with game updates already on their way – free of charge – this is turning out to be a real gem.

(Another game battling for the top position of first person shooter games is Battleborn, take a look at our Battleborn vs Overwatch review)