We assume that anything that exists can be named.

For example, the following are examples of common nouns: 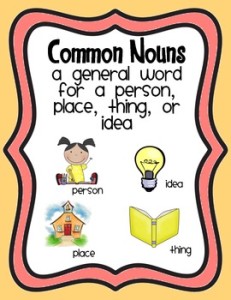 On the flip side, the following are examples of proper nouns:

Proper nouns can be thought of as unique nouns, since they refer to items which are unique and distinct from others. Proper nouns are usually capitalized as they name a specific person, place, thing, or idea. In general, common nouns are not capitalized.

“As it started to rain over Grove School, Sophie realized she had left her scarf and jacket in the car.”

There are some words which can function both as a proper and common noun. In these rare occasions, the type of noun must be determined from the context. For example, God is the name given specifically to the singular God monotheists believe in, where god refers to any one of many deities (e.g. in Norse mythology, Thor was the god of thunder and in Greek culture, Aphrodite was the goddess of love).

There are other subcategories of nouns. These are: Countable/Uncountable, Collective, Concrete, Abstract, and Possessive.

Countable nouns are common nouns (or proper nouns) which can be pluralized. They combine with numbers or number words (including indefinite terms such as a few or several) and most commonly take the letter “s” to show plurality, although there are several exceptions to this. Examples of countable nouns are: elephants, books, flowers, saucepans.

Collective nouns are the names given to groups. The group is comprised of individuals but is grammatically treated like a single entity (for example: my family is and not my family are). Examples of collective nouns are: school, family, army, committee.  It should be noted that in the United Kingdom, this rule does not always apply.  For example, in UK they will say “the rock band are good”.

Concrete nouns are classed by your ability to register the noun on one of your five senses. If you can see, smell, hear, taste, or touch the thing you’re trying to classify, it’s a concrete noun. Examples of concrete nouns are: clouds, perfume, music, salt, and water.

The final type of noun is called possessive. These nouns name to whom or what something belongs, and is always a noun followed by another noun.   Apostrophes are used to denote possession. Generally, apostrophe + “s” forms the possessive of singular nouns. It doesn’t matter if more than one thing is possessed. Examples of this are: Lucy’s coat, the kitten’s tail, London’s bridges. 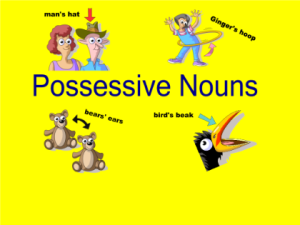 When a plural noun ends with an “s”, an apostrophe is used after the “s” to denote possession. Examples of this are: those merchants’ ships, the books’ pages.

When a plural noun does not end with an “s”, apostrophe + “s” is used to form the possessive. Examples of this are: the children’s shoes, the men’s drinks.

Tagged as: Nouns, Parts of Speech