I loved board games like scrabble, boggle, and trivial pursuit. Games which challenge your intellect, your visual skills, and in some cases your reflexes. You know, games which have the potential to seriously enrich your everyday life. Sometimes, staring at a screen gets to be too much, and you need to make some kind of a change. A game which is currently celebrating 10 or so years on the market is Bananagrams, which has won the hearts of players from all over the world. 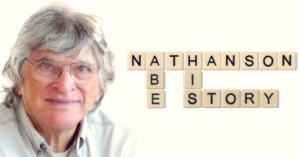 Bananagrams is a word-based game which was invented by Abe Nathanson, primarily for the benefit of his family. Abe and his family wanted a game which was competitive on the one hand, but accessible to all family members on the other. A game which was easy, yet portable. The result of this quest was Bananagrams, which was first introduced to the public in 2006. This game is meant for ages 7 and up, and can be taught and played with minimal effort.

Since its release, Bananagrams has become a game which is considered a real “must-have”. It is also one of the most popular travel games ever, since it can be played pretty much anywhere, and it doesn’t necessitate any kind of electrical power or special setup. One minute, and you are good to go. Just make some room, and be careful not to knock over your drink.

The name of the game was another invention of Nathanson’s, who claimed “this anagram game will drive you bananas!”. Since then, the game has had a few spin offs: the jumbo version, then foreign-language version, and the wild tile version, to name a few.

What Are The Rules Of Banagrams? How Do You Play Banagrams? 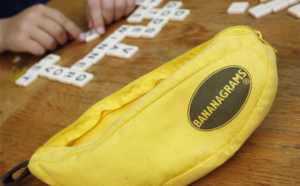 The rules are easy to learn, and here they are:

Open the banana bag, and let the letter tiles spill out. Every player then takes the same number of tiles, and leaves the rest of the tiles facing down. This group of letter becomes “the bunch”.

A player calls out “Split!”, and then the players turn over their tiles to reveal the letters they got. The players begin arranging their letters to form words, and these words must be part of an inter-connecting grid. No word tiles should be isolated, after some time had passed anyway.

Play continues with players calling “Peel!” until there are not enough remaining tiles in the bunch for all players to take one; in other words, when there are more players than tiles, you stop picking them up.

The first player to have placed all of his tiles into the word grid calls out “Bananas!”. That player’s word grid is then inspected by the other players, and if everything is properly spelled out and there are no errors or made-up words, that player is declared to be the games winner. 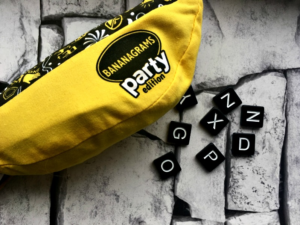 I recently had the pleasure of experiencing the party edition of Bananagrams, which I had not played before. The rules are pretty much the same, but there are extra ‘Party Power’ tiles thrown in there – 14 of them, to be exact – which add a funny twist to the familiar version of the game.

When a player recieves a party tile, he or she must immediately perform (or better yet, choose another to perform) the special behavior or silly action which is associated with the tile. Examples:

Switcheroo – switch seats with the person across from you, leaving your grid exactly as it is.

The Shield – a tile which protects you from all party tiles except Bombastic (which – when activated – has the power to demolish another player’s grid.) Remember, revenge is a dish best served cold. So are bananas!

Pouch Head – The player you choose wears the banana pouch on their head for the rest of the hand. Classic!

Those were a few examples. There are other funny tiles, and you can check the rest of them out at the Bananagrams website.

The birthday party I was at was winding down, and someone had the bright idea of playing this game. I was actually happy to play it. I know, it sounds lame to play it at a birthday party if you are not, oh, 10 years old – but trust me, alcohol helps to fuel the fun! (drink responsibly, yadda yadda yadda). So we played a round or two, and it was great.

My banana thinks it's a comedian… @bananagrams pic.twitter.com/s83TiTd8dc

Those of us who were into it quickly made a circle, and off we went. The game was over relatively quickly since we were five or six players, and I managed to lose spectacularly after someone had bombed my grid. And to make it worse, I was on my way to victory! Or so I thought.

Bananagrams is a fun game no matter what, but at a party it takes on an extra measure of fun and crazyness, due to the presence of those Party Power tiles. They are fit for a party, I’ll give ‘em that. 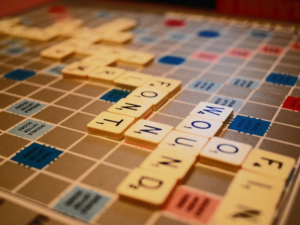 Earlier, I mentioned I like playing Scrabble, so I will do a little bit of a comparison between the two.

First of all, Scrabble is not a game I would break out at a party, unless there was some money involved. Money makes everything more interesting, doesn’t it? That, or turn it into a drinking game. Or both! Now that’s a party!

Scrabble resembles Bananagrams in several ways. In both games you need to make words fit on a grid; you have a personal pile and a group pile;  there is something of a time limit (depending on your game), so speed is a necessity; also, both of these games are meant to challenge and increase your abilities, simultaneously. Overall, Bananagrams is the more fun game, but Scrabble has its long and proud tradition. You can probably say that without Scrabble, we may not have gotten Bananagrams. Although, I don’t doubt Abe Nathanson’s innovation abilities.

With Bananagrams, there is constant motion. You have to keep re-arranging your tiles as more letters make an appearence in the game.

Scrabble has a points system, which Bananagrams does not. This makes Scrabble a bit more strategic in nature, I suppose. If you are into planning and taking your time, and also into saving some letters for later times… Scrabble may be right up your alley. But if you are more in the mood for a fast-paced game, then it is Bananagrams which will be able to provide you with what you seek.

Bananagrams is a dynamic game, and it has its exciting moments, because you never know which letter is going to come up. Perhaps you will get one which will completely change your grid! On the other hand, there is the time limitation factor. You need to be fast in order to win this game. I can say without a doubt that Bananagrams is one of the quicker games to play. Boggle is good, and it is also challenging, word-wise, but here you get to make and re-arrange your own grid as you go along, which is what makes it extra fun for the whole family.

At the suggested price of $14.99 for the game (which is also the list price for its various editions, or maybe $19.99 for some), it is quick, easy, inexpensive, very friendly to newcomers, and overall a fantastic game to play. If you get the chance to play it or pick it up at your local store, don’t pass it up. It is a relative small investment, but it can provide you with hours of fun.