In today’s increasingly technologically dependent society, it has become common for us to find ourselves in front of a screen for most of the day. Whether at work or at home, the fact that we spend a large part of lives staring at a screen has become a normal part of life these days and whether for better or worse, this isn’t going to change anytime soon.

But is this a good thing? There’s a lot of debate surrounding the health hazards associated with staring at a screen for most of the day and whether it’s a minor issue like eye strain or dry eyes, or more serious issues like headaches and blurred vision, ensuring that your eyes have the best protection available to them is an important part of life these days because so much of it is spent in front of a screen.

I never really considered using protective computer glasses and figured that any discomfort I may have been experiencing was probably just because I needed to get outside more or something – we can make up the strangest excuses sometimes. It was only until I noticed a friend wearing a pair of computer glasses at a friendly LAN that I decided to inquire about them.

When I put them on and tried playing, I was a bit confused by the color difference at first, but could notice a distinct difference in how my eyes focused on the screen. There’s a lot of debate around whether protective computer glasses actually work or not, but my eyes definitely felt more relaxed whilst wearing at them.

So I decided to do some research and looked into getting a pair of my own – and that was when I stumbled on Gunnar Optiks and their range of specialized computer eyewear. I’ve been a fan of the brand ever since and would like to review two of my favorite glasses in their catalog. I hope this will help you when it comes to making your decision when it comes to buying your own brand of computer glasses – so keep reading! 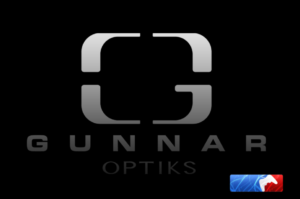 Gunnar Optiks is a company that was formed in 2007 by Joe Croft and Jennifer Michelsen and was developed around the idea of creating specialized eyewear that was specifically designed to help protect the eyes from computer vision syndrome.

For those who don’t know, CVS is the result of staring at a screen or another display device for long, uninterrupted periods of time and can result in blurred vision, headaches, fatigue, dry eyes, irritated eyes, dizziness and even double vision. These symptoms are often worsened in improper lighting conditions (dark rooms devoid of natural light).

Gunnar Optiks aimed their product at the gaming world as it’s a huge industry and gamers tend to spend lots and lots of time in front of a screen – more so than those who don’t play games on a regular basis. So they’re more at risk of developing the symptoms of CVS than the rest of us and therefore would have a higher demand for protective glasses. 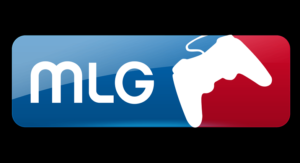 MLG stands for Major League Gaming and is a competitive gaming league that was formed in 2002. The aim of MLG is to host competitive video game tournaments throughout the United States and Canada and is structured around elevating computer and console game tournaments to spectator events like other sports.

The formation of this league lead to the growth of eSports as we know them today and it’s become a global phenomenon with hundreds of thousands of players from different countries around the world with some making well over a million dollars in prize money annually – which put this all into perspective for me as it’s no longer simply playing games in a garage (like it was when I started gaming), it’s become a serious profession.

Because of the serious nature of the league, MLG teamed up with Gunnar Optiks to create a range of glasses that were specifically designed for gamers. It’s not uncommon for MLG to partner up with other brands to create various products that are designed specifically for gamers, so you can trust that they have paid careful attention to detail when designing the glasses and ensured that they’re suited for people who spend a lot of time in front of a screen. 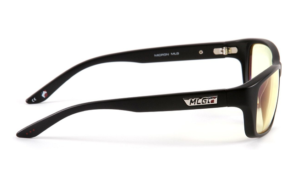 First of all, I think it’s important to stress that I don’t wear glasses in general and don’t have a pair of prescription lenses or contacts so I tried the Micron from the point of view of a total noob in relation to the world of glasses.

The first thing I noted was that they look cool. Really cool. In fact, I liked them so much, I found myself wearing them out of the office as well. They have a slightly rubberized frame which allows them to sit quite comfortably on your head and give excellent grip.

The glasses are also lightweight so they don’t weigh down on your face or ears yet at the same time, they feel strong and durable – they’re not made out of cheap plastic. The Micron has also been specifically designed to help counter the effects of the blue wavelength produced by LCD screens and balance out the greener tones of fluorescent lights.

This is due to the inclusion of their patented IONIK lens tints which help to shift colors to a warmer part of the spectrum whilst also increasing contrast perception which ultimately allows for a clearer, more focused image. This is one of the key factors in reducing eye-strain caused by UVA and UVB light which has been linked to cornea, lens and retina damage in the eyes.

One of the most analogous yet effective aspects of the Micron’s design is the shape of the glasses which Gunnar has labelled as ‘FRACTYL Lens Geometry’. The idea behind the specific geometry used in the design of the glasses is that it’s intended to help stop the flow of air running past the eyes and ultimately reducing the effects of dry, irritable eyes which are common when staring at a screen because we tend to blink less when we are.

This also makes the glasses more comfortable to wear and after a few minutes of wearing them, you’ll start to notice the color difference a lot less and they’ll start to feel more like an extension of yourself, rather than an accessory – they’re that comfortable.

I will argue that some of the claims of the company are a bit far-fetched (the idea the glasses create a microclimate in the space between the lens and your eyes sounds like nonsense to me – but they state that all their claims are based on lab-tests), but as far as protective glasses go, the Microns are comfortable, effective and durable – ultimately a good investment if you’re going to be staring at a screen for hours on end everyday. 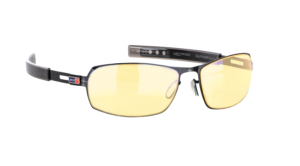 To start off, I have to admit that my review of the Phantom will be a little biased as I really enjoyed using the Micron’s more simply because of their look and feel – but that’s just my own personal preference. I’ve heard a lot of good things about the Phantoms and from what I can understand, they’re more effective for use by gamers because of their design.

But let’s move on to the nitty gritty. The first notable difference with the Phantoms is the the physical design of the glasses. The Phantoms are made from high tensile steel which makes them lightweight and durable whilst being flexible at the same time. While they lack the comfortable rubberized coating that the Microns have, they make up for this by weighing in a mere 25 grams – you’ll barely even feel them there.

The lenses are also developed with Gunnar’s patented DIAMIX material which helps to promote clear and distortion free vision as well as being able to take a slight beating before become scratched to the point of not being viable for use. However, I would always recommend that you take care of your glasses as they’re expensive and come with a microfiber bag which you can use to clean them as well as protect them from becoming scratched in general. Better to be safe rather than sorry!

One thing I do really like about the design of the glasses is that  the temples of the glasses (the parts that go over your ears) are flat and don’t have the typical curve that come with most standard frames. This makes them easier to wear whilst wearing headphones and won’t become uncomfortable or cause cramping when worn over a long period of time – ideal for gamers.

The Phantom’s also offer the FRACTYL lens geometry in their design as well as the IONIK lens tints that come with the Micron’s which adds to their comfortability and effectiveness in terms of spending long periods of time staring at a screen, but ultimately I’d have to say that the Phantoms are better suited to gamers in general simply because of their practical design. The Micron’s are my favorite because of their versatility but the Phantom’s can really help you focus more during gaming which could help you garner the competitive edge over your competitors.

You’re also able to get these with prescription lenses which is perfect for those of you who do actually wear glasses or contacts on a regular basis – a helpful tip for those who were wondering.

Are digital screens damaging our eyes? Yup! And the smart ones know exactly what to do. #GUNNAR https://t.co/3idVkygxt3 pic.twitter.com/6JXHDLWW1V

Before and After Using Gunnar Optiks MLG Glasses Eye Results

As I said earlier, there is still a lot of debate as to whether protective screen glasses actually make a physical difference in terms of your eye health or if they actually offer any protection against the effects of electronic screens.

But from what I have experienced, the difference is something that you have to experience for yourself to understand. When you first put them on, you’ll feel a little weird, as the color difference is odd for the first few minutes of wearing them – everything goes yellow.

However, once you’re eyes adjust, you’ll notice that they feel more relaxed when looking at the screen and the fact that you manage to prevent ambient air from running over your eyes as much will immediately help to relieve the strain of dry and irritable eyes.

To be honest, had I never come across protective glasses I probably wouldn’t have gone through the effort to get myself a pair, but once you try them, it’s hard to imagine gaming or working on a PC for a long time without them.

Ultimately though, I would only recommend buying either the Phantom’s or the Micron’s if you’re a serious gamer or tend to spend a great deal of time in front of a PC screen in office or at home. They’re costly and need to be maintained carefully in order to last longer, but they’re a worthy investment for those of us who are bound to the screen.

Gunnar has a wide range to choose from, so don’t limit yourself to only these two. Feel free to browse their catalog and find a pair that works for you or suits your lifestyle and price range. Like I said, once you try them on – you’ll probably be wearing them for the rest of your life, so be sure to choose a pair that you like.