English can be a tough language. This is especially true for those who are not native speakers, and most definitely true for those who may be studying English as a foreign language. With the advent of the internet and all it entails, many grammatical errors have become commonplace. It can be difficult to tell when one is mistaken, which is why we are here to help you out and make your life easier! 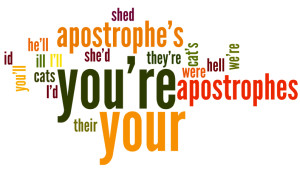 One mistake in particular, one which keeps on being made – even by natives sometimes – is using the word you’re when in fact the word your should be used, and vice versa.

So, what is the difference really? Well, generally speaking, the word your indicates possession, meaning that something belongs to you. Examples:

The word you’re, on the other hand, is a contracted word (a word made shorter) which simply means “you are”. In this case, the apostrophe is used in place of the letter A, transforming what would be two separate words (you are) into a single word (you’re). Examples:

Used in a single sentence, both words would appear in this fashion:

The whiteness of your teeth shows that you’re brushing twice a day.

Alternatively, that very same sentence could also be written without the apostrophe, like so:

The whiteness of your teeth shows that you are brushing twice a day.

Apostrophes are used in several ways: either as an indication of possession, or as an omitting punctuation mark. The omission can be in the middle or beginning of a word.

As a possessive, it appears in this way:

Usage of an apostrophe in the beginning of a word means it was two words which were shortened to one. Examples:

An apostrophe may not be used to pluralize numbers, capital letters, and initials which are used as nouns. Examples: 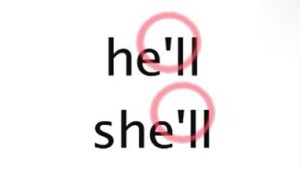 An apostrophe should not be used for pluralizing names.