Gun traditionalists are some of the most stubborn people you’ll ever meet. In addition to mounting staunch defenses of gun rights and the second amendment, traditionalists will go to extremes to maintain the status quo of guns themselves – dismissing technological advancements such as smart guns as unnecessary and unwanted. But hey, even semi-automatic weapons had their detractors back in the day, right?

The Kel-Tec KSG represents an advancement in guns that even the most determined traditionalist will be able to get on board with. Known for their innovative firearms, the KSG is Kel-Tec’s first entry into the shotgun market, but hopefully not its last. Featuring a unique size paired with a bullpup design – the gun is 26.1 inches in length – the KSG is a 12-gauge, pump-action shotgun that is absolutely ideal for home defense and law enforcement purposes. A bullpup-designed shotgun is one that is built with the action behind the trigger, which is helpful in that it provides more functional space on the body of the firearm. The KSG is a revolutionary firearm because of this bullpup design and length – the gun is much shorter than would be achievable in a non-bullpup design, as most shotguns feature. The shorter design of the gun makes for a gun that is easy to maneuver – this is why it is an excellent choice for self-defense weapons, and why it has become one of the most popular shotguns in the world. This is our Kel-Tec KSG Review. 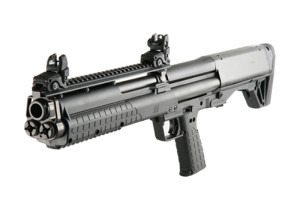 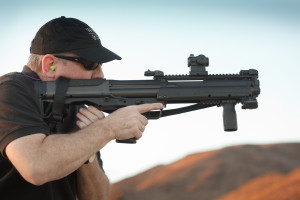 The Kel-Tec KSG is not just one of the most compact shotguns available, it is also one of the lightest. At 6.9-pounds unloaded, the KSG is remarkably light for a shotgun, thanks to Kel-Tec’s utilization of “zytel” – a light weight, glass-infused polymer which makes up much of the guns’ build ( Another amazing polymer based gun is the glock 19 read about it here). The receiver of the gun is made out of hardened steel, while the stock assembly and grip are made out of zytel. The weight of the gun is another reason why the gun is turned to so often for self-defense purposes, as it is easy to handle for men and women alike. Two pins on the back of the firearm make disassembly and cleaning a breeze – slide the pins out and the gun breaks down into five manageable pieces. The ambidextrous nature of the gun means that shooting from either side presents no limitations – the same controls and features are equally accessible from either side of the weapon. Kel-Tec has dealt with some concerns about the quality and reliability of their guns in the past, but the KSG has been widely praised for its endurance and dependability. 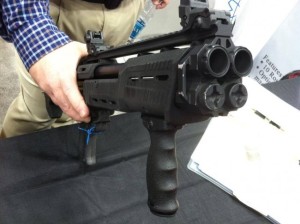 Again, the bullpup makeup of the weapon means that the trigger is in front of the receiver action. Sometimes this can lead to difficulty with the trigger, as there is more mechanical linkage needed to connect the trigger and action, but the KSG trigger feels strong all the same. The trigger pull weight is strong and resistant but appropriate for a shotgun. The firearm comes equipped with a manual selector switch which allows for the user to switch from one barrel to the other – either barrel can use either the same kind of cartridge or two different kinds of cartridges. At a length of 18.5 inches, the barrel is 2 inches shorter than that of the closest competing bull-pup designed shotgun – this is in large part what helps the KSG achieve such a short weight.

The grip is made out of zytel polymer, which makes for a comfortable, firm feeling in hand. Ultimately, grip and comfort are largely subjective categories in weapons – the KSG is known to favor gun owners with larger hands, for example. Luckily, however, Kel-Tec offers a large number of grip customization options and upgrades, which means your bases are covered regardless of your hand size (the front angled grip and cheek rest in particular is a popular choice among KSG owners). Additionally, the popularity of the KSG has led to a large amount of third-party support for the gun. 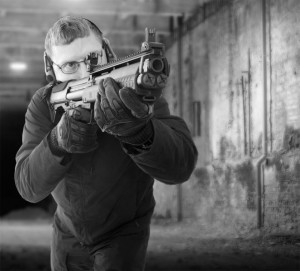 The word on the Kel-Tec KSG has been that it is an accurate weapon, but one that comes with a good amount of kick when firing due to the size and weight of the weapon. We put this to the test in our exclusive firing test with the KSG, and found that this line of thinking is largely accurate – the gun performed well at distances of up to 25 feet in terms of accuracy, but the kick was a problem for less experienced and weaker shooters who were not prepared to compensate for significant kick.

The twin magazine tubes of the KSG are conveniently welded under the barrel of the weapon and loaded separately with a switch level that pivots from one to the other. Not only does this double the capacity of the shotgun (the KSG can load seven rounds in each magazine, for a total of 15 rounds when including a chambered round), it offers gun owners flexibility in which ammunition they would like to use. Different ammunition can be loaded in either magazine tube, and the gun owner can switch between either – this would be impossible in a shotgun that featured just one magazine. The selector switch is easy to use and reliable – the act of switching between magazines becomes second-nature in no time. 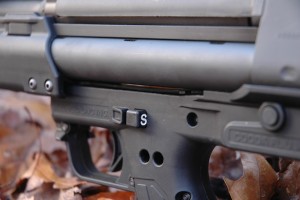 The KSG has a cross-bolt safety which shows a bold letter “S” when engaged, and a bold letter “F” when the gun is ready for shooting. The behind-the-trigger thumb style of this safety is both useful and practical – an ideal safety system that other shotgun manufacturers would be wise to adopt. Like all of the features on the gun, the KSG safety is ambidextrous and reliable.

The KSG does not feature any kind of iron sights, but does feature a 12-inch picatinny sight rail on top of the barrel for mounting different kinds of sights, as well as sling loops build into the gun. Generally speaking, shotguns do not necessarily need to be aimed down sight to begin with, but the popularity of the KSG has helped make it one of the most versatile weapons that there are in terms of sights, despite the lack of sights build onto the weapon. Both Kel-Tec and third parties manufacturers have developed different kinds of electronic or traditional sights for the KSG, which means that there are a number of options available to suit the needs of any kind of shooter.

The Kel-Tec KSG is an excellent, revolutionary shotgun that has managed to break free from the shotgun mold and be celebrated for it. The shorter length of the weapon made it an ideal choice for self-defense and law enforcement purposes upon its release, and it has remained as such until this day. Additionally, the customization options that exist for the firearm means that the gun can be finely tuned to fit any particular shooters needs – making this a great stock shotgun that has the potential to become your personal, ideal shotgun.

Be sure to check back in here at Edumuch.com for more firearm reviews!