There’s something poetic about the rise, fall, and second coming of Pokemon. The media franchise hit it big in the 90’s as a best-selling video game which gave life to a Poke-craze that resulted in successful animated movies, TV series’, a card game, toys, etc. Pokemon faded from the mainstream eye, settling in as a niche product with a loyal, passionate fan base – that is, until recently, with the release of the new mobile game – Pokemon Go. Taking the world by storm, Pokemon Go has emerged as what is now the most downloaded mobile game in history. Boasting more active users than Twitter and more downloads than Tinder within a week of release, the augmented reality-based game has transcended the boundaries and limitations generally associated with mobile games – it has become a cultural phenomenon, making waves throughout the mainstream world and boosting Nintendo’s valuation by $13 billion in the process. History has truly repeated itself, as 20-years ago Pokemon released as a groundbreaking Gameboy (read: mobile) game that launched Nintendo to new heights and brought about Pokemania – virtually the same thing has happened again. Pokemon is back on top – a live-action movie is in the works, and sales estimates of the next installments in the main game franchise have soared. The game – an inventive, Pokemon-catching and battling based affair, has struck a chord in a number of ways – from nostalgically for 90’s gamers, to capturing the attention and fascination of people eager to experience augmented reality gaming, or games that feature real-world mapping. The question is, is there substance behind the flash? Is the game actually, well, any good? I will answer those questions and more in this, our feature: Pokemon Go Review 2016 – Is it Really Just a Fad? 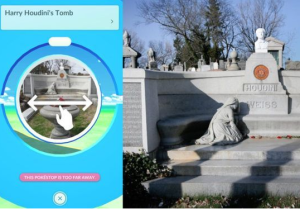 Pokemon Go utilizes real-world mapping as well as augmented reality gaming. Essentially, players move about the game map as they do in the real world – the GPS and mapping systems in players’ phones mirror player movements in real life – the more you move, the more likely you are to encounter wild Pokemon. The game even maps and utilizes noteworthy places and landmarks as Pokestops – places at which players can collect items and experience points, or Pokemon Gyms – where the battling takes place. The object of the game is to encounter and catch wild Pokemon, strengthen them, and then use them to win various Gyms for the sake of you and your team (there are three teams from which players can choose from – Red, Blue, and Yellow). The augmented reality aspect of the game comes into play when engaging wild Pokemon – the game uses smartphone cameras and gyroscopes to project an animated Pokemon into the real world on phone screens in a fun, highly meme-able way. 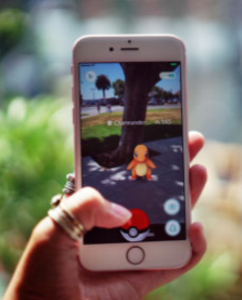 The simplicity of the game is both a blessing, in that the game is accessible for just about anyone, and a curse, in that the game does not offer a whole lot of depth. There is no
battling aspect to catching Pokemon, unlike in the main series of games – all that it takes to catch a Pokemon is to flick a Pokeball at them on the screen and hope your Pokemon doesn’t break free. There is something undoubtedly satisfying about catching a rare Pokemon, but the repetitiveness of meeting common ones – I came across about 25 Zubat’s in a day of play – can be frustrating. There is incentive to catching the same kind of Pokemon more than once, as Pokemon ‘doubles’ can be ‘transferred’ in exchange for points that help you to evolve your Pokemon, but this is only a minor balm on an otherwise frustrating aspect of the game. A number of in-game items can help to attract wild Pokemon more frequently for you and other players, but these are mostly bait for in-game purchases – you won’t be receiving much help by way of items at all without forking over some cash. 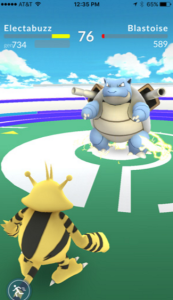 The battling and gyms system is similarly limited. In order to battle, you must travel to a gym (depending on your area, there may or may not be many around) and battle the leader. If the leader is on a rival team, you can win the gym for your own team with a victory, at which point you must leave one of your own Pokemon behind to defend the gym. If the leader is on your team, you can strengthen the defenses of the gym by adding a Pokemon of your own to defend it. The battles that take place are not live, head-to-head affairs – your Pokemon is left to defend the gym on its own, as challengers fight a computer-controlled version of the Pokemon of the gym leader. Although these are real battles, they aren’t the turn-based, RPG style rumbles that we Pokemon veterans are accustomed to – basically, you have two options: tap on the enemy Pokemon repeatedly, or hold down on the enemy Pokemon when your ‘special’ meter is full to unleash a stronger attack. Two attacks, no more, no less, although you do have the option to dodge the enemy Pokemon by swiping left or right. The fact that battles can only take place while at specific locations is frustrating – I’m pretty sure just about everyone playing the game would enjoy the opportunity to match up against friends. This is something that will hopefully be addressed in the near-future by updates to the game. 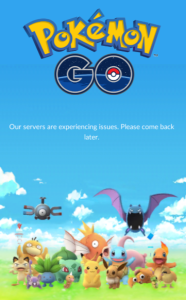 Pokemon Go has been absolutely hammered by historic levels of traffic, to the point in which players have been complaining loudly about the crashing, server errors, and glitching effecting the game. To be fair to Niantic (the game developer) and Nintendo, no one could have expected this kind of reaction and traffic – the response to the game has been historic in every sense of the word. However, that doesn’t change the reality of the situation – the crashes, the times during which the game can’t be accessed due to server error, and the glitches are real, and they are frustrating as can be. I finally encountered a wild Pikachu after a week of play, and when the game froze after I had tossed my Pokeball at it, I was ready to throw my iPhone down the street. In theory, Niantic could get the situation under control and put an end to these problems, but there’s no telling how many players have already been lost due to the frustration stemming from issues like this. 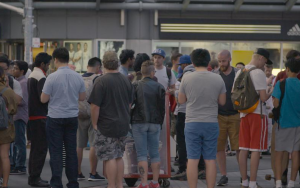 The Secret Behind Pokemon Go

The most historic and unique aspect of Pokemon Go – more so than even the AR or the real-world mapping – has been the community-based response to the game. Never before has there been a game that bred so many real-life interactions – in order to play the game, you have to go outside and move around, and given that lots of people are doing just that, many people who play the game are meeting and experiencing it together. Just the other day a reported Vaporeon sighting in New York City’s Central Park caused a minor stampede of players – this being the latest in a long string of interesting stories and happenings in the real world caused by Pokemon Go. Ultimately, this is the secret behind Pokemon Go’s magic. A large number of addictive mobile games have been released, but there has never been a game that captured the attention of players like this and created a hybrid real-world/in-game experience. Any game that gets kids up and moving, and manages to promote real-world friendship building, deserves to be commended. 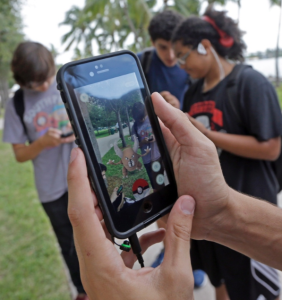 This is the question on everyone’s minds: Will Pokemon Go stand the test of time? I’ve devoted a lot of space in this review to criticizing the limited gameplay and mechanics featured in the game, but I have to admit, there is something extremely addictive about trying to catch em’ all. Looking at the blank spaces in my Pokedex is enough to keep me playing, but is that the case for everyone? A few people I know have already deleted the game either due to lack of interest, frustration due to the in-game glitching, or some combination of those two reasons. If people begin to stop playing, could it start a chain-reaction in which the hype dies down and the community-based response to the game fades away, driving off even more players? We’ll find out soon enough. For now, we can safely conclude that there is at least a large core base of users in it for the long-haul – the mystique behind the noticeably absent legendary Pokemon has people buzzing, and a number of planned upgrades to the experience – improved AR, global leaderboards, in-game trading, live battles, etc. – have many people, myself included, very excited. It’s important to remember that this isn’t the finished Pokemon Go product – Niantic is still digesting the feedback and responses they’ve been receiving from players. We’re likely to be getting an improved product via updates very soon. In the meantime, in my opinion, the game still works well enough – it’s the closest we’ve come yet to realizing our dream of going on our own real-world Pokemon journey, and that’s good enough for me.

Grade: 4/5 or Incomplete: The Pokemon Go experience offers enough fun to overcome some stumbling out of the gate that should improve in future updates.

Thanks for checking out our Pokemon Go feature.

Check out our Top-10 Tips, Tricks, and Secrets for Pokemon Go, and as always, check back for more on Pokemon Go and all things gaming here at EduMuch!

Tagged as: how to play pokemon go, is pokemon go good, pokemon review