I Accept that Exception

One problematic issue facing English speakers worldwide – made possible through the advancements of Modern English – is the fact that, some words sound incredibly alike, yet have very different meanings.

Pronunciation is important, but not everyone has the same quality of diction and enunciation. This can cause feelings of confusion and frustration with even the most fluent speakers.

Accept and except is just an example of words that are constantly mixed up by English speakers everywhere. In these days, with spoken English counting for so much, it is of cardinal importance to understand the differences between the two words, so that you will be able to speak with confidence and get your message across.

So, what are the differences?

Accept is used primarily as a verb, indicating several meanings: 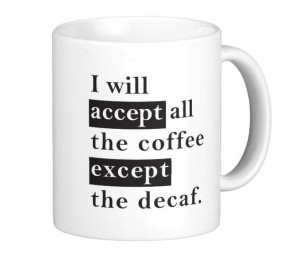 TIP! – The word accept begins with an ‘A'. Make sure to open up your mouth and enunciate the sound properly. This will surely prevent any misunderstanding, and help you get your point across.

Except is a word which is multifaceted. It can be used as a preposition or a conjunction:

There are many same-sounding words in the English language. Some are more annoying than others. However, I have no doubt that with practice and repetition, anyone will be able to master the differences, and enrich his or her vocabulary tenfold. I hope this has been a helpful and instructive piece!