In today’s rapidly changing world, new pieces of writing software are being released every year. Some programs manage to stick around, and others fade away. It is the nature of this kind of software (or is it all kinds?). Either way, if it is not up to par, it probably won’t make it.

Strong English-writing skills are a huge leg up, no matter what field or industry you are coming from. This is what programs like Grammarly and WhiteSmoke are here for. English is an international language, and as such it has rank over many others. That is a fact. It is used in business, education and academia, the arts, and in many other milieus. Wherever you go, you can bet that having good English will be able to open some doors, and make way for opportunity.

In the older days of word processing, we had basic spell checkers. Oftentimes, they were integrated into the word processor you were using. In time, grammar checkers began to pop up, whether as standalone software, or as additions to an existing word processor.

Microsoft Word, for instance, has a built-in grammar checker, but it is a relatively weak one. And this is taking into account the recent development of Word 2016, by the way. Word may be an excellent word processor, but its grammar-checking algorithms could use a boost. Then again, Word never claimed to be the best at grammar and sentence structure. It does what it is meant to do, so I have no problems with it. Let’s not forget, this is a very professional tool, which is used by over a billion users.

So, back to the topic at hand. Let’s pit two of the best grammar-correction software against each other, and see what we come up with.

WhiteSmoke is an all-encompassing writing companion. It is a program created to edit text, enhance it, clarify it, and generally help people become better writers. It does this by checking a document in a more contextual way, and not word for word like similar programs. Created in 2002, and subsequently released in 2003, the software offers the writer some essential tools: spell checking, grammar checking, style and syntax correction, a dictionary, a thesaurus, a translator, and other features. WhiteSmoke is available in several versions:

WhiteSmoke has stated it is a “world-leading English writing software”. Quick and easy to use, with hundreds of templates to choose from, you can say it has certainly lived up to that claim.

Grammarly was launched in 2009. It’s designers and creators were not satisfied with the writing-enhancement programs which were available then, and decided to do something about it. It is a cloud-based platform, which checks your spelling, grammar, style, originality, etc. It provides phrasing alternatives, citation suggestions, and a way to seriously learn from one’s mistake.

Grammarly is offered in several packages: 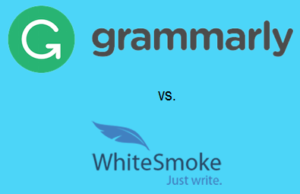 Okay, so we spoke of the two programs a bit, now let’s compare their features. At least, those which are comparable.

Let’s get this out of the way – no software will ever catch 100% of the mistakes and errors which could occur in a piece of text. However, there are some programs which can catch up to, say, 95%. These two are on that list. They point out the common and less common errors, and also take it a step further. There are issues of passive voice, redundancies, technical jargon, style, usage, etc., and they all should be addressed.

Both Grammarly and WhiteSmoke go far beyond the standard grammar and spelling problems, and seriously help your writing stand out, seem more intelligent, and more professional. The suggestions they provide – whether it is on a single word or an entire sentence –  can be taken or rejected by the writer. Both of these programs can be added to other word processors, and are web-integratable.

So, where do these two part? Well, they both offer solid advice on capitalization, articles, punctuation, syntax. Grammarly seems to be more meticulous when it comes to issues like passive voice, negatives, and correct use of modifiers, adjectives, and verbs.

I believe that WhiteSmoke, being more context-based, will bring some much-needed clarity to somewhat-convoluted pieces of text. Grammarly, though, has the upper hand when it comes to editing features.

Both of these programs have a dictionary, a thesaurus, writing templates (WhiteSmoke has significantly more, I believe), and tutorials on proper writing. WhiteSmoke also has a translator – for 11 languages, no less – but I wouldn’t trust it to properly translate a whole document. A few words here or there is doable, and it is a great feature to have, but I feel WhiteSmoke’s translator still needs work before it is considered a real assett to the platform.

Both programs also have a way to detect if your text us original. Out of the two of them, I’d give Grammarly’s plagiarism checker the edge, but ultimately they both do a good job at finding what’s original and in some cases providing appropriate citation suggestions.

Right off the bat, the cheaper one is WhiteSmoke Premium at $119.95, yearly, as opposed to Grammarly Premium’s annual plan which costs $139.95. WhiteSmoke also offers a one-time purchase, good for three years of services and updates, for the price of $299.95. That is something which Grammarly does not have, and it gives WhiteSmoke a bit of an edge here. A web browser extension is an option which both offer, and it is free.

Both of these are very good programs, and it is impossible to pick one overt the other. Why? Because they both have advantages and disadvantages. I’d have to give the edge to WhiteSmoke, but really it all depends on you and your needs as a writer.

My advice is to have a trial run of both software, and then make a decision. If you know for a fact you will be online and on the move a lot, go with WhiteSmoke Web or Grammarly Premium. If you are a teacher, a student, or a member of faculty, there is a chance the people at Grammarly.EDU will be able to help you save money by making you a great offer.

As for practicality and accuracy, they are both worth it. Are they perfect? No, but they can catch a ton of mistakes, even of the most advanced nature. They are a tool worth keeping.

Writing English with confidence is a skill many of us would like to have. By using a writing-enhancement program we not only make sure that the emails, posts, tweets, reports, and assignments we send out or hand in are error-free, but we also learn how to grow as writers. These two programs are still highly popular, many years after their respective releases, because they provide their users with a way to improve and enhance their own skills.

Some say being able to write properly and eloquently is a talent, and that may be true, but it certainly does not mean it cannot be acquired. Give these two programs a try for a few days, and you’ll definitely know which is the one for you. Keep on writing!