If you’re asking the question, “who is Markiplier?”, then I must say – you are fairly out of touch. No offense. A true YouTube superstar, Markiplier (real name: Mark Edward Fischbach) produces a variety of content which generally revolves around the gaming genre. Markiplier boasts 16 million subscribers to his YouTube channel – good for the 20th-most subscribers of all-time. If you cut out the JustinBieberVEVO, Ellen Degeneres riff raff, his channel is actually in the top-10 of all-time (among legitimate YouTube content creators). His social media presence is nearly unrivaled in the YouTube community as well – with 3.1 million Facebook likes, 4.9 million Instagram subscribers, and 4.8 million Twitter followers, Fischbach interacts with his followers in a variety of ways and across several different platforms. 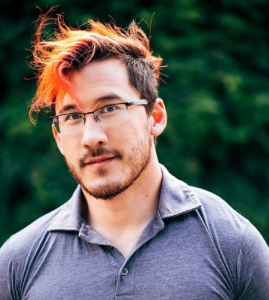 Fischbach’s father was serving in the United States military when he met mama-Markiplier. Although he was born in Hawaii, Markiplier and family would spend most of his formative years in Cincinnati, Ohio, where he began to pursue a biomedical engineering degree at the University of Cincinnati. Recognizing his distaste for academia, as well as a passion for gaming content creation, Fishbach made the bold decision to drop out of college in order to pursue his YouTube career. That decision has paid some serious dividends, as we will detail more particularly when I get to the ‘Markiplier income’ section. [Spoiler alert: AdSense money is very legit.]

What makes Markiplier so popular? Well, you’d have to check out his content to really find out. The proof is in the pudding, as they say, but Markiplier’s ‘Let’s Play’ style generally consists of overreactive antics which play off of whatever game he’s playing. Laughing, crying, screaming – you name it, Markiplier has done it on camera. Additionally, however, Markiplier has done a remarkable job of not only attracting subscribers who enjoy his content, but of cultivating his following, establishing trust and loyalty. Markiplier is known for his complete openness and honesty with his subscribers, often creating vlogs to keep them updated on the latest regarding YouTube, his channel, as well as his personal life.

What is it with gaming personalities being born between 1989-1992? Sure there are some exceptions, such as the 32-year old Seananners, but the late 80’s-early 90’s time period is undoubtedly the ‘golden age’ for births of future man-child vloggers. One day, hopefully, Malcolm Gladwell will spearhead a research effort to determine which privileges and advantages were afforded to these people that made them more likely to be successful at building a YouTube gaming channel. I hypothesize that it has something to do with this age-range being the sweet spot for folks between being familiar with and practically nostalgic about ‘classic gaming,’ but not so old that they’re out of touch with newer, modern gaming.
Where was I again? What is this article even about? Oh yeah, Markiplier. The guy was born on June 28, 1989, which makes him 27 years old at the time of the publishing of this sorry excuse for a blog post. So just in case you bypassed Wikipedia, Google’s built-in answers, or all of the other more sensible resources for this sort of thing – now you know how old Markiplier is. Congratulations.

How Can You E-Mail Markiplier?

Before you travel down this road that will inevitably lead to disappointment, let me be the bearer of bad news: Unless you are a Google executive tasked with informing Markiplier that his AdSense revenue will double if he does a review on the Google Pixel XL, he most likely has no interest in corresponding with you. With that being said, his email address is markipliergame@gmail.com. Try social media if that doesn’t work out for you, and hope that Markiplier is kind enough to indulge you with a reply.

What’s the Deal with Markiplier’s Mustache? Or his Hairstyle? 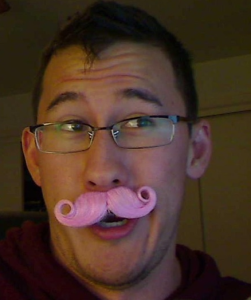 Markiplier’s alter ego, who is often featured in videos on his channel, is a character called Wilford Warfstache. Warfstache, who is allegedly just Markiplier himself in disguise, looks remarkably like Markiplier – save for his defining, iconic pink mustache. Markiplier has yet to explain who (or what) Warfstache truly is, where he comes from, or how he managed to find someone who resembles himself so closely, but fingers crossed that these answers will one day be shared with the world. Until then, we wait with bated breath. As for his hairstyle, and his never-ending need to dye and style his hair in different ways, well… the only answer as to why he does this must be that Markiplier is so desperate for attention and validation that he feels the need to constantly change his look up. There is literally no other explanation.

I try not to have anything to do with fanboys who worship man-child vloggers in excess. That lifestyle is so unhealthy that the thought of associating with it in any capacity makes me somewhat uneasy. This is no different than anyone who tries to steer clear of folks who practice poor personal hygiene. Better safe than sorry. However, for reasons unbeknownst to me, Markiplier worshipers seem to have begun to produce fan fiction-like content on various platforms such as wattpad and Tumblr. If you have interest in this sort of thing, you need to start re-evaluating some of your life choices – leave a comment in the comments section. I’m here to help.

This was the first picture I took in 2016 pic.twitter.com/QMYYvcaP3g

Where Does Markiplier Live?

Markiplier currently lives in Los Angeles, California – capital of the YouTube community and home of the Lakers,  Venice Beach, and some of the most superficial people in the world. Most YouTube stars head West to L.A. after they ‘hit it big,’ and Markiplier is no exception. The city affords content creators with networking opportunities and venues to produce content that they could not hope to find anywhere else. Markiplier hasn’t forgotten his humble beginnings, however – he visits his hometown of Cincinnati often and has documented these travels on his channel.

How Tall is Markiplier?

Most online sources peg Markiplier’s height at roughly 5-foot-10, which means he is probably about 5-foot-7 when adjusting for online celebrity height inflation. Don’t question me on this – I have used extensive scientific evaluation to arrive at my conclusion and don’t deserve to be questioned by anyone who is not as well-versed in celebrity heighting as I am.

Does Markiplier Have a Girlfriend?

Why, yes. Yes he does. Her name is Amy Nelson, and while the internet has already taken it upon itself to dox the poor girl to no end, I will choose not to publish any details regarding her history – online or IRL – that she herself has not volunteered. Amy and Markiplier began dating in 2015, although the couple did not ‘go public’ until a Vidcon appearance that they made together in 2016. Amy is a ‘Game Designer & Animator’ who also hails from the great city of Cincinnati, and has made the occasional appearance in Markiplier’s videos. Who knows where this blossoming love will lead? Perhaps the two will be wed, or perhaps things will fizzle out as most YouTube romances seem to. Only time will tell.

How Much Does Markiplier Make? What is His Net Worth?

Playing the YouTube earnings guesstimating game is no easy thing. There is a lot of information about a lot of YouTuber’s circulating around out there, and given that this is the internet, not all of this information is reliable. However, through careful and painstaking calculation and analysis,  I can conclude that Markiplier will earn around $4-8 million per year based solely off of YouTube ad revenue at his current subscription and view levels. Additionally, Markiplier’s current net worth can be estimated at $14-$20 million as of early 2017. Now, Markiplier is no PewDiePie – the true king of YouTube money.  But he’s clearly no slouch, either. Needless to say, Markiplier will not be going hungry any time soon. 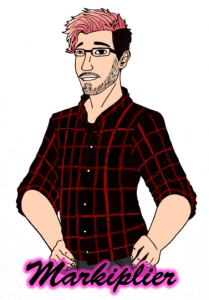 You bet. The amount of fan art that Markiplier receives is unprecedented, as his creative and out-of-work fans have taken it upon themselves to ‘honor’ Fischbach by drawing him to the best of their (limited) abilities. But seriously speaking, Markiplier has a lot of talented fans, many of whom have come up with some truly impressive renderings. Send Markiplier your art and he just may kind enough to feature it in a future video!

Is Markiplier Going to be in a Movie?

Maybe. The more prominent Markiplier becomes, and the more his channel grows, the more likely it will become that film makers will want to include him in their films in some capacity. However, the truth is that Markiplier has already been in two different movies. Sort of. I am talking of course about Markiplier’s role in The Smosh Movie, as well as his own project – Changing the World. It’s important to note that Markiplier is not an actor, nor should his fans expect him to begin starring in legitimate acting roles at any point in time. At best, there will be some fun cameos to look forward to.

Markiplier does have a Twitch channel, but it is largely an inactive one as he has opted to livestream over the YouTube streaming service instead. Can’t blame Marky for this one, as keeping all of his content in one place just seems more sensible than expecting your audience to find you across multiple platforms. Additionally, YouTube’s improved live services have made it easier for creators to use. Anyway, Markiplier livestreams frequently and often uses his live platforms to raise money for various worthwhile causes – he’s a good dude.

This might be an unwise decision given that the readers of this feature will likely be Markiplier fanboys for the most part, but I must say that Pewdiepie is undoubtedly superior to Markiplier. I’m sorry, but I have to tell it like it is. Pewdiepie has evolved quite admirably into a substantive content creator while Markiplier has basically stuck to his brainless, reaction-style let’s play stuff. If it ain’t broke, don’t fit it, I guess – but that same old shtick isn’t going to help Markiplier surpass Pewdiepie – the undisputed king of YouTube (51 million subs and counting).

Well, now that you know all that there is to know about Markiplier, I guess it’s time to question some of your life choices and wonder why any of this information is even remotely important to you. And as always, thanks for reading!