The grammar and writing-check software market (for lack of a better term) is no longer an untapped one. From Grammarly to WhiteSmoke, there are a number of quality options available for users who are looking to get digital feedback on their writing that goes beyond the rudimentary grammar and spell-checking built into word applications such as WordPerfect of Microsoft Word. One of the most unique and exciting of these products is Ginger Grammar.

Ginger Software, an Israeli start-up company, offers language improvement technology designed to diminish language barriers and advance communications in various forms, particularly in a digital capacity. The specific product we are reviewing that is offered by Ginger Software, called ‘Ginger Page’, is a proofreading and improvement tool used to correct and enhance the language, grammar, and quality of writing of any given work.

The founders of the company, Yael Karov and Avner Zangvil, originally thought of the idea after coming to the realization that non-Native English speakers need help improving their grammatical English. Generally, people who learn English come to have a decent grasp of conversational English, but proper written English, which is largely a necessity for work and in various professional capacities, never reaches an adequate level. Ginger’s patented software algorithm, which deals with natural language processing, was found to be even more effective as a proofreader and writing tool than a language educational tool.

As far as all of the benefits and uses of the Ginger system, which is both a desktop and mobile application, there are a plethora:

-Spell Checker: Many spell checkers are inherently flawed in that they will try to correct mistakes with additional mistakes or incorrectly replaced words – particularly on mobile. This results in tedious and frustrating typing processes which generally waste more time than had the word simply been deleted and typed out again, properly. Ginger’s algorithm determines the word that you’re actually trying to type based on the sentence structure, and corrects accordingly.

-Grammar Checker: Anyone who has used Microsoft Word or any mainstream word application program is familiar with their obvious limitations and shortcomings. Outside of the most basic

rights and wrongs in terms of grammar, word applications offer little by way of writing improvement. Ginger’s algorithm is designed to not only identify and correct basic grammatical errors, such as fragments and incorrect capitalizations, but identify deeper flaws in the writing, such as singular vs plural errors, excessive use of passive voice, overall tense usage, etc.

-Proofreader and Teacher: Most people have had the experience of writing an important paper or report, only to read and re-read the finished product ad nauseam to make sure that there are no errors or mistakes that they will come to regret – as described in our previous Grammarly review. Ginger acts as your own personal proofreader, identifying all sorts of writing errors so that you don’t have to sweat it. Ginger also acts as a writing teacher of sorts, by analyzing repeated mistakes and patterns and adapting to the writing style of the individual. Ginger can offer personalized advice and tips to correct common mistakes of the user, and explain how to avoid making these mistakes in the future. Ginger even includes games and quizzes to help improve your writing.

-English as a Second Language – As it was originally intended, Ginger does work as a remarkably effective English language teacher. For individuals who want to bring their written English up to speed, and especially in a professional writing capacity – as is vital in today’s globalized business world – look no further than Ginger. There is no more effective way to bring yourself up to speed on sentence structures, verb and subject agreement, pronoun usage, prepositions, and more.

-Dyslexia – Over 10% of the human population suffers from dyslexia. That’s over 700-million humans, or 30-million Americans afflicted with dyslexia – a statistic that is likely to shock most people who hear it. Dyslexia effects writing as well as reading, and Ginger is designed to remove over 95% of all dyslexia-caused errors, making it the only software that is capable of combating dyslexia-influenced typing errors on anywhere near that level. 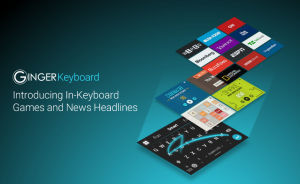 sentence, paragraph, or an entire document if need be. The more often Ginger is used, the more it will learn from the user and be able to better identify errors and provide tips for improvement. The interface is extremely easy to use, and although one might think that over-reliance on a proof reading tool might stifle English learning, this could not be further from the case. I found that the more I used Ginger, the easier it was for me to identify the flaws that perpetually reared their ugly head in my writing. In a funny way, excessive usage of Ginger almost serves to render Ginger as obsolete, as Ginger will help make you a better writer, one that isn’t reliant on proof-reading tools. Ginger Keyboard, a mobile keyboard available on iOS or android, is something of a condensed version of Ginger that allows mobile users to correct their typing by hitting an instantly-correcting “Ginger Button” that is installed into the preset keyboard itself.

Overall, Ginger is an excellent proof-reading and learning tool that has a number of uses and applications and is designed to help you outgrow the need for proofreading applications. Ginger takes auto-correct to the next level, and would be of a tremendous benefit to anyone looking to improve their written English – in many different capacities. We have featured Ginger content as well as a Ginger Review in the past, and we’re still big fans of the product.