Computers and the general public have enjoyed a pretty fruitful relationship over the years. Much like other inventions, though, the parts of it which are not too pleasant have finally caught up with us. It has taken some time to figure out the downsides, but in recent years the short- and long-term consequences of prolonged computer/tablet/phone/console usage are becoming more apparent. One newly popularized wearable item – computer glasses – are here to help.

What Are Computer Reading Glasses? 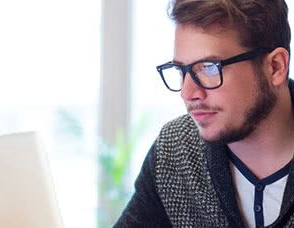 One of the major shortcomings associated with constantly being in front of different screens is the effect which this behavior has on our ocular system. Just like any other muscle in our body, the eyes and visual system have the ability to become strained and damaged. There is only so much they can take before bad things begin to happen. For this precise reason, computer glasses were invented

Now, obviously, this also has to do with the amount of safety precautions one takes. It has been known for quite a while – for instance – that you should sit in a certain way and act in a certain way if you wish to avoid back pain, neck pain, and carpal tunnel syndrome. Some people choose to adhere to these warnings, and some don’t.

Another case can be made in favor of genetic disposition (or a lack of one). Some people are more prone to physical strain and damage than others. It is simply how we are wired.

Computer Glasses: Not Necessarily For Everyone

That being said, computer glasses or not for 100% of the population. If you have been using computers and staring at screens for significant amounts of time during your life, and you haven’t developed any kind of symptom or discomfort whatsoever – computer glasses are probably not for you.

It goes along with the whole “if it ain’t broke, don’t fix it” way of thinking, and there is some merit to that. But according to the data amassed in recent years, most of us are indeed suffering from computer vision syndrome (CVS) to some extent.

The major issue with CVS is that with most individuals, it manifests as a temporary condition, which tends to disappear after you discontinue use for some time. In other words, we sit in front of the computer or television monitor, and after some time our head or eyes begin to ache a little, or perhaps our vision becomes a bit strained.

We dismiss it (or pop a pill), then when we quit the activities for some time (I mean minutes and hours, not days and weeks), we discover that the symptoms have ebbed. We are re-encouraged, and repeat the process the next day.

The symptoms of CVS are different for each individual, but they generally consist of: neck pains, fatigue, red or dry eyes, eye strain, vertigo, blurred vision, and sometimes double vision. Now, these don’t all come at once. They gradually increase, as time goes on without proper treatment.

Computer reading glasses are not only meant for reading, and are sometimes referred to simply as ‘computer glasses’ or ‘gamer glasses.’ These are different names for what is essentially the same device – a pair of glasses (often tinted) which help to alleviate and prevent the worsening of the symptoms associated with CVS.

Much like corrective eyeglasses, they come in different shapes, sizes, and types of lenses. We will go over some of the more popular ones, and attempt to make a few things clearer. 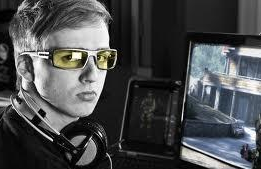 This is the simplest and probably most common type of computer glasses available. This sort of model reduces the amount of strain put on the eyes, by acting as a pair of traditional reading glasses, which are designed for computer reading distance (which often differs from ordinary reading distance).

The entire lens is single focus, but is made for computer usage, and this – by the way – is also the reason why traditional reading glasses may not suffice. Those of us who spend time at a computer will find that regular readers won’t quite close that distance, and computer readers are better at closing the gap, effectively making your eyes more relaxed. 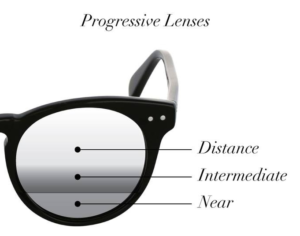 Progressive lenses are multi-focal by definition. The difference between ordinary ones and computer-oriented ones, is that the intermediate distance portion is larger with the computer glasses. The smallest area of the lens is dedicated to distance vision, and there is another area devoted to near vision.

For this reason, these glasses are recommended for use specifically with computers and screens. They are not for reading, driving, or other activities which ordinary progressive glasses are possibly designed for. 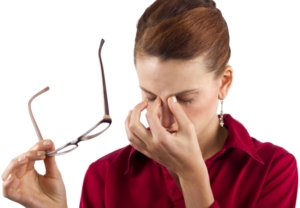 Unlike progressive lenses, bifocal and trifocal lenses are more clearly defined. There are various lens powers with these kinds of glasses, and with bifocals they are not as seamless as true multifocals. Occupational lenses are designed for office use, hence the name.

In the office, you often need near and intermediate lenses, geared towards computer and reading uses. In that sense, bifocal computer glasses may not always be the right choice, since they are primarily meant for near and distant use, with the intermediate not being present.

This is why bifocals are a less popular choice altogether, especially since the advent of trifocals and multifocals.

Much like the bifocals, these are also more clearly defined, and are not as seamless as true multifocals. The ‘tri’ factor refers to near, intermediate, and distant: The three plains of sight which the trifocal lenses address. These are a lot more prevalent, since they offer three separate focal points. As with the other types of glasses, keep in mind they are meant for occupational use. This means they’re probably not going to be as good for use outside the office.

However, this is not a blanket statement. Some computer glasses are better than others. Some can be tailored and made to order, so you could use them outside the office. To each his own. Obviously, these would probably cost a lot more. 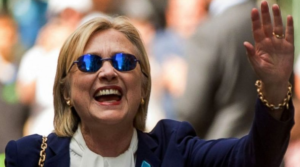 Most computer glasses have a kind of tint to them. Yellow, light gray, pink,and others. The light – often named ‘blue light’ – which monitors and screens emit is thought to be the cause for a lot of the strain and damage which the eye undergoes. The color tint is designed to alleviate or eliminate that causal effect.

To be clear – some amount of blue light is just fine. Our eyes are powerful tools, and they can be around all kinds of environments without sustaining temporary or permanent damage. It is overexposure which can damage your ocular system, and which you are best actively avoiding.

When it comes to screens and computers, it is best to nip the problem in the bud. You don’t want the problem grow and escalate to a point where the damage is irreversible. The tint – I have a yellow one on my glasses – is something which may take some getting used to. However, once you grow accustomed to it, it becomes part of your routine.

Computer glasses are not for everyone, but for those who do need them, they can be highly beneficial. Those who oppose these types of glasses often cite their prices and unproven efficiency in studies. To that I say this: first of all, some glasses – particularly those of the gaming variety – are indeed overpriced.

As for the studies being conducted, studies can be manipulated in both directions. There have been studies which have shown computer glasses to be effective. There is no absolute right or wrong here. You’ll have to make up your own mind regarding these glasses and their efficiency. To that end, I recommend purchasing a cheaper pair at first. See how it affects your daily routine.

Regardless of the chosen method, if you suffer from any kind of CVS-related symptoms, get yourself checked out by an ophthalmologist. See what state your eyes are in, and use the good doctor for some consultation on computer glasses. It can’t hurt to have the facts before you, right?

What’s more, getting this done sooner rather than later is probably what is best for you, your eyes, and your productivity.

Find out whether Viewsonic, Epson and BenQ live up to the hype in our review features. Only at EduMuch.