Some writing-enhancement programs are full of bells and whistles. Sometimes those bells and whistles are justified, sometimes they are not. StyleWriter 4 is one of the most straightforward, non-BS pieces of writing software there are, and this is part of what makes it so unique. Its goal is simple: to make your English text plainer, simpler, and more understandable. It is a program which was created with a single concept in mind: the idea that using plain English is the best way of conveying ideas and transferring meaning. The key is efficiency. Using written communication effectively to get your message across. This is what StyleWriter offers.

Created by Nick Wright, Rosemary Tilly, and Peter Stanton, StyleWriter’s earlier versions have always been compatible with Microsoft’s Word (check out WordPerfect, too), and were used as an add-on to the world-famous word processor. The 4th version is still used in this way, as an addition which complements – but does not replace – Word’s spelling and grammar checkers.

StyleWriter’s origins are rooted in the United Kingdom in the 1990’s. At that time, Wright decided to create a piece of software which could help out those in need of a more comprehensive tool than Microsoft Word. Wright had many years of experience as an editor, software designer, lecturer, and instructor under his belt. You can say that he knew precisely what he was doing when he set out to create StyleWriter. He wanted to build a tool which could be used by everyone.

Over the years, there have been three versions of StyleWriter, each picking up where the other left off, and improving on its predecessor. With each new version, the interface became more intuitive and user-friendly, the algorithms became more sophisticated, and the results became more pronounced in people’s work. 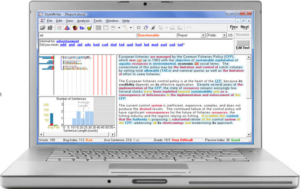 StyleWriter is a copy-editing tool. It is meant for writers and readers of the English language, all over the world, and it comes in several different versions. Depending on your intended use, you will choose the one which is best for you.

First off, there is the free 14-day trial download. Get this done, and see what it is all about. I could go on and on about the program and its innerworkings, but the best way to get a true feel for it is to actually use it in action. Nothing else comes close.

The Starter Edition is meant for homes, students, small businesses, and the like. It provides the user with ways to use English correctly, locates any spelling and grammar issues, and suggests edits when relevant. This is the basic version, and I feel it completes Microsoft Word in a big way.

The Standard Edition includes stats and graphs, all meant to help you proofread and edit on a higher level. Every document is logged, and the data obtained while using this edition is used to help the writer improve over time. This is a version recommended for larger businesses, offices, and establishments.

The Professional Edition boasts what is called the Editor’s List – it is a feature which scans every single word in the text, and provides a list of words which are complex, too technical, unusual, passive, or generally misused within the context and genre. It is the version designed for professional writers, and it is true to its name.

StyleWriter can seem a little frightening at first, with all of its stats and graphs, splitscreen capabilities, and bars of all kinds. It can be a little overwhelming, but you get used to it quickly if you just start writing. Remember, this is a tool which emphasizes clarity and straightforwardness. It would be counter-productive – not to mention hilariously ironic – to create such a tool in a way which no one can follow.

StyleWriter does not require an internet connection to function. This could be seen as a positive by some, and a negative by others. Its clearest advantage is that it can actually guarantee the safety and security of your documents, since they are never created, edited, or formatted online. On the other hand, some people out there enjoy the security of having their text on a cloud. This is a judgement call, but I always saw it as an advantage.

You can switch between US, UK, and Australian English – an option which many writing-enhancement pieces of software will not provide. You can choose to customize and further personalize the interface’s windows. The text, the bars, graphs, and suggestions can all be moved around or even hidden, so as to create the perfect writing experience for you.

StyleWriter runs through your text with lightning speed, and pits your words against different lists of words, looking for errors or discrepancies in usage, style, phrasing, and context. The software then generates a number, a grade, for your text, thus making the editing process easier and more manageable.

There are twenty (or so) different genres or tasks which a user can choose from. This is a necessity, since legal writing is nothing like creative writing, for instance. Other writing programs offer similar options, but StyleWriter goes much further.

Not only can a writer choose the style in which the writing is being done, there is also the option of choosing the audience. In other words, the program asks: who will be reading this document? And, according to the options (general public, in-house, specialist), the use of technical terms is more permissible within the text, and is then used to greater effect. It makes the user aware of medical jargon overkill, for instance, in a document meant for the general public. This is a huge upgrade, in my opinion.

StyleWriter also offers companies and organizations the “House Style” option. It is a way for a company to unify its templates and style guides, thus making things a lot easier for anyone who is writing on the company’s dime. Consistency counts for a lot in business, and it goes a long way in making texts more understandable.

Creating certain things a standard – built right into the word processor, no less – can save a lot of time and energy. Names, dates, titles, terms, phrases, etc. – all written properly, with no errors. it is all about giving people and employees the tools they need to get their message across in the best possible way, and keep things uniformed.

The biggest changes in StyleWriter 4 are found in the improved Editor’s List, the choice of newer categories and analysis options, the “pep” list (a feature which encourages positive writing habits), and in the audience options.

StyleWriter’s older versions are good, but the 4th version is what really put it on top of many other pieces of writing software. StyleWriter may cost more, but it is good enough to earn that extra fee. It offers features which no other program has.

StyleWriter vs. Grammarly vs. WhiteSmoke

As you have no doubt gathered, StyleWriter is a unique piece of software, even in a world where many other high-quality writing-enhancement programs are already in circulation. It is NOT a mere spelling and grammar checker. No, sir.

There is a lot to be said in favor of programs like Grammarly and WhiteSmoke (and Ginger, too!), and StyleWriter is right up there with them, though it does have a different apporach. I am not about to rank these programs, mind you. I feel they are all good, and that they each have their time and place. It could be you will download the new version of Grammarly, and find that it fits you better. It is a personal choice. But yes, I believe those three are on top, and probably ahead of many other similar programs.

StyleWriter has many advantages, but the one main drawback (or rather, what could be considered a drawback compared to those two) is that StyleWriter works only with Microsoft Word, while Grammarly and WhiteSmoke are more standalone. They can be integrated, at least partially, into Word, Notepad, or Outlook – but they also maintain a strong internet presence, and this could be a deal-maker for some. There are many people who want a broswer extension and online platform, which work together with their chosen writing software.

Grammarly and WhiteSmoke are also great tools. Grammarly, for instance, has a plagiarism checker (something which the other two lack). WhiteSmoke has a dictionary and translation option, though it does need some more work, in my opinion. StyleWriter was not created as competition for other spelling and grammar checkers. It may do that, too, but it is working on a whole other level.

StyleWriter is a tool for laymen and professionals alike. Choose the right kind of edition, and you will be writing more clearly and concisely than ever before. Over time, you will gain more confidence and find that you are making less errors. This is because StyleWriter aims not only to fix your texts, but also help you educate yourself on proper writing. Developing your skills as a writer can give you a great boost, whether in your personal or professional life. Written English is always in demand, no matter where you are. It is an internationally-spoken language, and having a good handle on it can open many doors.

Check out our WhiteSmoke and Writer’s Workbench reviews while you’re here at EduMuch!